Pelvis dated to 1.2 million years ago shows our ancestors were born with bigger heads 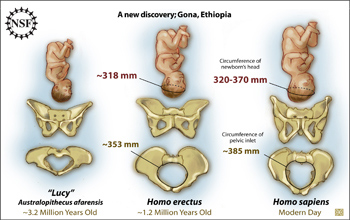 The female pelvic bones and babies of "Lucy", a Homo erectus and a modern woman.

A recently discovered female pelvis is changing minds about the head size of an ancient human ancestor, Homo erectus, and consequently revising notions about how smart they may have been. Found in Gona, Ethiopia, not far from the site that yielded the 3.2 million year old remains of the famed Australopithecus afarensi "Lucy," the pelvis indicates that Homo erectus, which lived in Africa roughly 2 million years ago, had a larger birth canal than originally suspected and could have given birth to babies with bigger brains.

Before the female pelvis was found, evidence from the pelvis of a juvenile male led researchers to project that the cranial circumference and capacity of newborn Homo erectus babies was 30 percent smaller than more recent projections based on the newly discovered pelvis.

Sileshi Semaw, a paleoanthropologist at the Stone Age Institute and Indiana University-Bloomington, and his colleagues assert that the head of a baby born from this Homo erectus could have been 318 millimeters in circumference. This is at the lower end of the spectrum of modern day human beings whose cranial circumferences at birth typically range from 320-370 millimeters. Semaw and colleagues present their findings in the Nov. 14 issue of Science. The research is funded in part by the National Science Foundation.