Unlocking Climate Mysteries and Engaging Students from Harlem to Antarctica 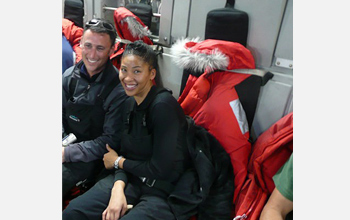 Like most middle-school science teachers, Shakira Brown, a teacher at New York's Harlem Children's Zone Promise Academy, has spent the past months working hard to grab her student's interest in science. It's probably safe to say, however, that few of her colleagues are going to the extreme--both in distance and effort--that she is this fall.

Brown is currently in Antarctica as a member of a National Science Foundation (NSF)-supported scientific expedition that seeks to document what conditions were like there tens of millions of years ago. The project will help us understand what could happen to our planet as the climate changes. It will also act as a window for K-12 students from across the country to see scientists in action. Brown, scientists and students on the expedition are blogging about their work and will interact with students throughout the expedition via videoconferencing and the Internet.

"For me," Brown said from Antarctica earlier this week by email, "this work speaks to what science is in essence, a natural curiosity that drives us to seek knowledge, embrace adventure and face fears."

Brown is part of the Offshore New Harbor (ONH) Project, headed by Stephen Pekar, a geology professor at Queens College, City University of New York (CUNY) that seeks to unravel some of the mysteries of the earth's climate. The project's work is supported by the U.S. Antarctic Program. As manager of the program, NSF coordinates all U.S. government-sponsored research on the southernmost continent.

Pekar's research was sponsored specifically by a grant made as part of NSF's contribution to the International Polar Year (IPY), a coordinated scientific deployment to the polar regions and the largest international scientific effort of its kind in 50 years. NSF is the lead agency for the U.S. government's IPY efforts.

Scientists understand that increased levels of carbon dioxide (CO2) and other so-called greenhouse gases can alter our climate, and many experts believe that this climate change may affect our lives dramatically. After remaining relatively steady for millions of years, the amount of CO2 in our atmosphere has climbed rapidly in the last 100 years and is expected to climb even higher, according to the ONH team.

The last time CO2 levels were that high was between 25 and 40 million years ago. Sometime during that period, about 34 million years ago, the climate switched abruptly from a warm greenhouse world, where very little ice collected in Antarctica, to the so-called icehouse world, where large ice sheets began to form. Based on research by Pekar and others, once formed, the ice sheet covering Antarctica sometimes grew larger than it is today and sometimes melted to a much smaller size, dramatically lowering and raising sea level.

By studying the sediments deposited off the coast of Antarctica during the last years of the greenhouse world, and the transition to the icehouse world, the ONH team hopes to gather data about the planet's physical conditions during that period in order to better understand what happened the last time CO2 levels were this elevated.

"Since this time interval was the last time that CO2 was as high as what they predict for this century, getting a climate history from studying sediments from this time will be looking back to our future," Pekar said.

After setting up a base camp on the sea ice off the shore of eastern Antarctica, Marvin Speece of Montana Tech will lead the team in using sophisticated tools to seismically image and reconstruct the ancient sediments beneath the sea floor that were deposited during the greenhouse era, and during the transition period to the icehouse era.

"Since this will be the first time that data of this quality has been collected in a region that is so critical for understanding the greenhouse world climate in Antarctica, we will be using new tools to explore undiscovered country," Pekar said.

The goal is to locate the best site to drill into these sediments on a future expedition.

There are several ways educators, students and people interested in learning more about the expedition can track the team's progress. The project has created a Web site that provides links to the nine educational organizations that are currently collaborating with the OHN expedition (http://qcpages.qc.cuny.edu/offshore_new_harbor/index.htm), as well as the following additional resources:

For her part, Brown hopes the expedition will achieve another important goal--connecting students to the possibilities science has to offer.

"It is my deepest hope that the children that we touch as we share this expedition with them will come to understand that science is not simply something read in a book," Brown said. "It is the impetus that causes us to search deeper within ourselves and our world for the truth that surrounds us."