Cooperative agreements signed with teams from the University of Wisconsin, Dartmouth College, University of New Hampshire are vital to climate studies 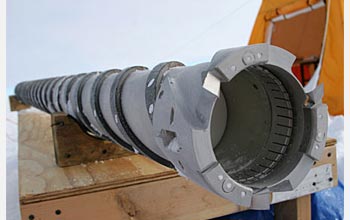 A drill used to extract ice cores in Antarctica.

Effective ice-core drilling is vital to NSF's polar research. Through the Office of Polar Programs, NSF manages the U.S. Antarctic Program, which coordinates all U.S. research on the southernmost continent; NSF also has a robust research program in the Arctic. NSF's director serves as the chair of the Interagency Arctic Research Policy Committee (IARPC).

The cooperative agreement will create an Ice Drilling Program Office (IDPO) at Dartmouth College coordinated by Mary Albert, visiting professor of engineering at Dartmouth's Thayer School of Engineering, with collaborations at the University of Wisconsin-Madison and the University of New Hampshire. The IDPO will provide scientific leadership and oversight of ice coring and drilling activities funded by NSF. Officials said the new collaboration will encourage innovation in ice-core drilling technologies while better serving the glaciological community's evolving needs. At the University of New Hampshire, Mark Twickler will serve as IDPO's communications director providing information and input from established community research groups to the IDPO office, and establishing a Web site that will provide information to the community and to the general public.

The IDPO will also oversee the second entity, the Ice Drilling Design and Operations Group (IDDOG), led by Charles Bentley, emeritus professor of geophysics at the University of Wisconsin-Madison, as it works to provide engineering design and construction support for new drilling systems.  IDDOG will also support the operation and maintenance of existing drilling systems.

The two new entities will replace the existing operation run by the Ice Coring and Drilling Services (ICDS) group at the University of Wisconsin as the principle supplier of ice drilling and coring support and expertise to NSF-funded research, and will interact with other research agencies and international partners as well.

Ice coring and drilling are critical components of scientific research in both polar regions and on high mountain glaciers, but they are not simple tasks. At high altitude, cold sites, the snow never melts, it just piles up year upon year, burying in the older snow clues to the climate at the time that snow fell on the surface. So by collecting vertical cores from ice sheets, evidence of the past can be obtained. Designers and engineers must create heavy-duty equipment that can work in some of the most remote places on the planet in punishing conditions of extreme cold, wind, precipitation and high altitude. "Ice drills come in a surprisingly large variety of sizes, types and purposes," Bentley says, "to satisfy the myriad needs of glaciological researchers."

The payoffs are high-quality ice core samples that provide scientists a better understanding of past climate conditions, levels of pollution and even clues into the origins of the universe as well as boreholes that give scientists access to the insides of ice sheets and glaciers. "Ice coring science has led to many important discoveries," Albert said last month, "including the realization that climate can change dramatically in less than ten years."

The intricate and painstaking work of extracting climate information from evidence of accumulation rate, chemistry, isotopes and gases in the ice relies on the efforts of many scientists. For example, the gas samples from the cores allow scientists to compare levels of past atmospheric composition with levels in the atmosphere today; in fact, ice coring science led to the discovery that "greenhouses gases" such as carbon dioxide have correlated with temperature trends over many hundreds of thousands of years.

While the cores provide most of the information about the ancient environment, the hole left behind provides access to the interiors of the glaciers and ice sheets for measurements of present-day temperatures, deformation rates and basal conditions that allow researchers to better understand ice dynamics. Such research is crucial for studying how melting and faster outflowing ice at the poles may impact sea levels in response to climate change.

Because the science guiding these activities is constantly changing and adapting to new discoveries and conditions, everyone in IDPO and IDDOG will continually interact with researchers to help provide and develop the right tools for the job. NSF officials also believe that the new entities will be able to work closely with the community to incorporate the best ideas and techniques in ice coring and drilling.