Researchers use beams of light to grab and hold molecules 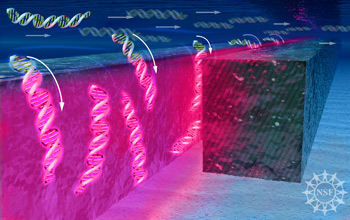 DNA molecules in a nanoscale channel get trapped by light.

View a video of DNA molecules suspended in a stream of water flowing through a nanoscale channel.

Using a beam of light shunted through a tiny silicon channel, researchers have created a nanoscale trap that can stop free floating DNA molecules and nanoparticles in their tracks. By holding the nanoscale material steady while the fluid around it flows freely, the trap may allow researchers to boost the accuracy of biological sensors and create a range of new 'lab on a chip' diagnostic tools.

The Cornell University research team reports its findings in the Jan. 1, 2009, issue of the journal Nature.

"For this research to emerge in the marketplace in a device such as a 'lab on a chip', it is essential for engineers to be able to manipulate matter at the scale of molecules and atoms, particularly while the matter is contained within a fluid stream only slightly larger than the particles themselves," says William Schultz, the National Science Foundation (NSF) program officer who oversaw the researchers' grant. "NSF and other funding agencies have made nano-science and -technology a high priority. The Cornell researchers have made an important step in realizing the full potential of these devices."

Light has been used to manipulate cells and even nanoscale objects before, but the new technique allows researchers to manipulate the particles more precisely and over longer distances.

"At the nanoscale, we can think of light like a series of massless particles called photons," says Cornell engineer David Erickson, one of the co-authors of the study. "We've demonstrated a way to condense these photons down to a very small area and stream them along a special type of waveguide, a device that acts like a nanoscale optical fiber. When pieces of matter, like DNA or nanoparticles, float near these streaming photons, they are sucked in and pushed along with the flow. The effect is sort of like moving a truck by throwing baseballs at it. The trick is that we found a way to have a large number of highly efficient "collisions" between the photons and the nanoparticles, getting them to stay in our device and keep them moving along it."

Erickson and fellow Cornell engineer Michal Lipson, along with their graduate students Allen Yang, Sean Moore and Bradley Schmidt, and colleagues in Erickson's and Lipson's research groups, crafted a wave guide to shunt light into a narrow beam, laying a trap for the DNA and other small pieces of material.

Each of the tiny channels within the waveguide is only 60-120 nanometers (billionths of a meter) wide, thinner than the 1,500 nanometer wavelength of the infrared laser light channeling through them. The channels keep the light waves focused and enhance their ability to interact with the DNA particles, preventing them from flowing by.

The breakthrough is the use of the slot waveguide, which condenses a light wave's energy to scales as small as the target molecules, overcoming prior limitations caused by light diffraction. Because the waveguide is also a "nanochannel" it can both trap and transport objects using light.

For their experiments, the researchers used water solutions containing either DNA or tiny nanoparticles, washing the fluids over the waveguide microchannels. At a speed of 80 micrometers per second, the system traps less than a fourth of the target particles flowing by, but with smaller channel sizes, slower flows and higher energy lasers, the success rate increases.

"What we're hoping to do now is better understand some of the underlying physics to see what else might be possible with this approach," adds Erickson. "Ultimately we imagine being able to take all the ultrafast and highly efficient optical devices that have been developed for communications and other applications over the last 20 years and apply them to the manipulation of matter in different types of nanosystems. Hopefully in the future we can shuttle around individual strands of DNA the same way we now shuttle around light."

In future iterations of the system, the light will both capture the particles and transport them, so the DNA would arrive at the trap and then be directed to another location, such as a sensor or a staging ground for the assembly of a structure.