Microbe Survives in Ocean's Deepest Realm, Thanks to Genetic Adaptations

Discovery provides clues to how life thrives in extreme environments 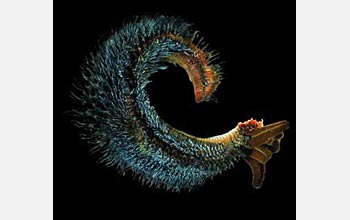 The genome of a marine bacterium living 2,500 meters below the ocean's surface is providing clues to how life adapts in extreme environments, according to a paper published Feb. 6, 2009, in the journal PLoS Genetics.

The research focused on the bacterium Nautilia profundicola, a microbe that survives near deep-sea hydrothermal vents. It was found in a fleece-like lining on the backs of Pompeii worms, a type of tubeworm that lives at hydrothermal vents, and in bacterial mats on the surfaces of the vents' chimney structures.

One gene, called rgy, allows the bacterium to manufacture a protein called reverse gyrase when it encounters extremely hot fluids from the Earth's interior released from the sea floor.

"The discovery of reverse gyrase in Nautilia profundicola suggests that it plays a key role in this microbe's ability to thrive near deep-sea hydrothermal vents, where conditions are thought to resemble those found on early Earth," said Matt Kane, program director in the National Science Foundation (NSF)'s Division of Environmental Biology, which funded the research. "Knowledge of microbes living near vents may aid our understanding of how life evolved."

They combined genome analysis with physiological and ecological observations to investigate the importance of one gene, rgy, in N. profundicola's ability to adapt to the extreme changes it's exposed to in the deep sea.

"Previous studies found the gene only in microorganisms growing in temperatures greater than 80 degrees Celsius, but Nautilia profundicola thrives best at much lower temperatures," said Barbara Campbell, a marine scientist at the University of Delaware.

"The gene's presence in Nautilia profundicola suggests that it might play a role in the bacterium's ability to survive rapid and frequent temperature fluctuations in its environment."

Photosynthesis doesn't occur in this dark environment, where hot, toxic fluids oozing from below the seafloor combine with cold seawater at very high pressures.

Microorganisms that thrive at hydrothermal vents must adapt to fluctuations in temperature and oxygen levels, ranging from the hot, sulfide- and heavy metal-laden plume at the vents' outlets to cold seawater in the surrounding region.

The researchers uncovered further adaptations to the vent environment in Nautilia profundicola, including genes necessary for growth and for sensing environmental conditions. They also proposed a new route for bacterial nitrate assimilation related to how other bacteria use ammonia as an energy source.

Nautilia profundicola contains all the genes necessary for life in conditions widely believed to mimic those in our planet's early biosphere.

"It will be an important model system," said Campbell, "for understanding early microbial life on Earth."