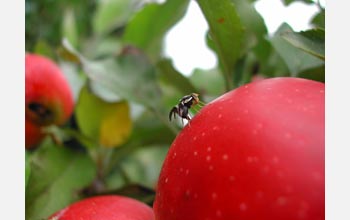 A female apple maggot fly, Rhagoletis pomonella, implants an egg into an apple.

View a video interview with Jeffrey Feder, a University of Notre Dame biologist.

Jeff Feder, a University of Notre Dame biologist, and his colleagues say the introduction of apples to America almost 400 years ago ultimately may have changed the behavior of a fruit fly, leading to its modification and the subsequent modification of a parasitic wasp that feeds on it.

The result is a chain reaction of biodiversity where the modification of one species triggers the sequential modification of a second, dependent species. The National Science Foundation supports the research.

"It's a nice demonstration of how the initial speciation of one organism opens up an opportunity for another species in the ecosystem to speciate in kind," said Feder. "Biodiversity in essence is the source for new biodiversity."

For almost 250 years after the introduction of apples to North America, insects referred to as hawthorn flies, Rhagoletis pomonella, continued to meet on the small, red fruit of hawthorn trees to mate and lay eggs. Then, in the mid-1800s, some of these "hawthorn flies" began to mate and lay eggs on apples instead. According to Feder, the flies attracted to apples eventually became genetically differentiated from the flies attracted to hawthorns, and so did the wasps that live on the flies' larvae.

The genetic distinctions mainly show up as gene frequency differences between the flies and their associated wasp populations rather than fixed, all or none, differences. This is consistent with the process by which new biological species arise.

"The Diachasma alloeum wasp that we studied is just one of several wasps that spend a significant portion of their lives attached to hawthorn and apple flies," said Feder. "We have preliminary evidence that one of the other wasps also may be forming specialized races on the flies, but it is too early to tell definitively."

"What is startling is how fast populations can ecologically adapt to new habitats and begin to evolve into different species in front of our eyes," he said.

Feder says the research is important because it provides insights into solving Darwin's mystery of the origins of new species. "Clues can be found right before us as we sit on our deck chairs barbecuing and drinking pop. All we have to do is open our eyes and we can see new life forms coming into being in that scraggly old apple tree in our backyard."