Discovery paves way for a new type of quantum computing 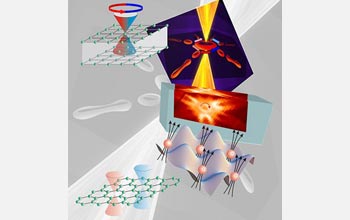 Researchers report seeing electrons mimic the presence of a magnetic field where none is present.

An international team of scientists led by a Princeton University group recently discovered that on the surface of certain materials collective arrangements of electrons move in ways that mimic the presence of a magnetic field where none is present. The finding represents one of the most exotic macroscopic quantum phenomena in condensed-matter physics: a topological Quantum Spin Hall effect.

The research could lead to advances in building a new type of quantum computer that has the flexibility to operate at moderate temperatures as opposed to the low temperatures that are a standard requirement for today's powerful computing devices. The work at Princeton was funded by the National Science Foundation's Division of Materials Research and the U.S. Department of Energy Office of Basic Energy Sciences.

Previously researchers could only observe similar motion of electrons under strong magnetic fields and low temperatures known as the quantum Hall effect, which became the foundation of two Nobel Prizes in Physics in 1985 and 1998.

But, theorists at the University of Pennsylvania and the University of California at Berkeley proposed that on the boundaries of certain three-dimensional materials, the spin of individual electrons and the direction in which they move were directly aligned with corresponding electrons without needing high magnetic fields or very low temperatures. In order for this to happen, researchers also theorized that electrons need to move at extremely high speeds.

Now Zahid Hasan, an assistant professor of physics at Princeton University, and his colleagues report observing the synchronized spins of many moving electrons in an exotic material, a bulk crystal of antimony laced with bismuth. They report the findings in the Feb. 13 issue of the journal Science.

Their experiment was based on researchers' hunch that electrons in bismuth-laced antimony would exhibit quantum effects that mimic the presence of a magnetic field because they move at very high velocities. This would allow for the predicated quantum motion to take place.

"This result is quite astonishing for we are seeing electrons behave in a way that is very similar to the way they do when a strong magnetic field is around but there wasn't any around in our experiment" said Hasan, who led the international collaboration with scientists from the U.S., Switzerland and Germany.

In addition to electrical charge, electrons possess inherently magnetic or ghostly rotational properties. In the quantum world objects can turn in ways that are at odds with common experience. The British physicist Paul Dirac, who won the Nobel Prize in Physics in 1933, proposed that an electron's internal "rotation" makes it behave like a tiny bar magnet with both north and south poles, a property he coined "quantum spin."

Today's computers employ a simple on-off logic that is based on the motion and storage of electrons in a silicon semiconductor. New designs could take advantage of the additional capacities offered by the quantum spin of the electrons in the experimental material to reduce power consumption and enhance performance.

To make the discovery, the research team used a high-energy, accelerator-based technique called "spin-resolved angle-resolved photoemission." The technique enabled simultaneous measuring of the energy, wavelength and spin of electrons on the surface of the experiment's material.

"As a technical achievement, or a series of physics achievements alone, it is pretty spectacular," said Philip Anderson, the Joseph Henry Professor Emeritus of Physics at Princeton and a winner of the 1977 Nobel Prize in physics. "For theoreticians," Anderson added, "the observation of this quantum effect is both interesting and significant."

"The spin sensitive measurement techniques developed here may shed light on other important fundamental questions in condensed matter physics such as the origin of high-temperature superconductivity," said Thomas Rieker, program director for the NSF's Materials Research Science and Engineering Centers. "This discovery has the potential to transform electronics, data storage and computing."

Researchers now need to find materials suitable for ushering in this new class of electronic circuits.