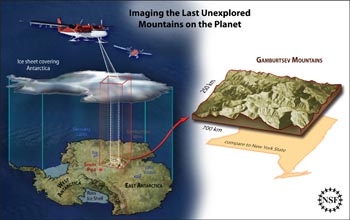 An artist's rendering of the Antarctica Gamburstev Province (AGAP) project.

View an animation showing how the Gamburtsevs may have caused the East Antarctic Ice Sheet to grow.

Flying twin-engine light aircraft the equivalent of several trips around the globe and establishing a network of seismic instruments across an area the size of Texas, a U.S.-led, international team of scientists has not only verified the existence of a mountain range that is suspected to have caused the massive East Antarctic Ice Sheet to form, but also has created a detailed picture of the rugged landscape buried under more than four kilometers (2.5 miles) of ice.

"Working cooperatively in some of the harshest conditions imaginable, all the while working in temperatures that averaged -30 degrees Celsius, our seven-nation team has produced detailed images of last unexplored mountain range on Earth," said Michael Studinger, of Columbia University's Lamont-Doherty Earth Observatory, the co-leader of the U.S. portion of the Antarctica's Gamburstev Province (AGAP) project. "As our two survey aircraft flew over the flat white ice sheet, the instrumentation revealed a remarkably rugged terrain with deeply etched valleys and very steep mountain peaks."

The National Science Foundation (NSF), in its role as manager of the U.S. Antarctic Program, provided much of the complex logistical support that made the discoveries possible. NSF also supported U.S. researchers from Columbia University, Washington University in St. Louis, Pennsylvania State University, the Center for Remote Sensing of Ice Sheets (CReSIS) at the University of Kansas, the U.S. Geological Survey (USGS) and the Incorporated Research Institutions in Seismology (IRIS).

The initial AGAP findings--which are based on both the aerogeophysical surveys and on data from a network of seismic sensors deployed as part of the project--while extremely exciting, also raise additional questions about the role of the Gamburtsevs in birthing the East Antarctic Ice Sheet, which extends over more than 10 million square kilometers atop the bedrock of Antarctica, said geophysicist Fausto Ferraccioli, of the British Antarctic Survey (BAS), who led the U.K. science team.

"We now know that not only are the mountains the size of the European Alps but they also have similar peaks and valleys," he said. "But this adds even more mystery about how the vast East Antarctic Ice Sheet formed."

He added that "if the ice sheet grew slowly then we would expect to see the mountains eroded into a plateau shape. But the presence of peaks and valleys could suggest that the ice sheet formed quickly--we just don't know. Our big challenge now is to dive into the data to get a better understanding of what happened" millions of years ago.

The initial data also appear to confirm earlier findings that a vast aquatic system of lakes and rivers exists beneath the ice sheet of Antarctica, a continent that is the size of the U.S. and Mexico combined.

"The temperatures at our camps hovered around -30 degrees Celsius, but three kilometers beneath us at the bottom of the ice sheet we saw liquid water in the valleys," said AGAP U.S. Co-leader Robin Bell, also of Lamont Doherty. "The radar mounted on the wings of the aircraft transmitted energy through the thick ice and let us know that it was much warmer at the base of the ice sheet."

The AGAP data will help scientists to determine the origin of the East Antarctic Ice Sheet and the Gamburtsevs' role in it. It will also help them to understand the role the subglacial aquatic system plays in the dynamics of ice sheets, which will, in turn, help reduce scientific uncertainties in predictions of potential future sea level rise. The most recent report of the Intergovernmental Panel on Climate Change (IPCC) said that it is difficult to predict how much the vast ice sheets of Greenland and Antarctica will contribute to sea-level rise because so little is known about the behavior of the ice sheets.

The data also will be used to help locate where the world's oldest ice is located.

The AGAP discoveries were made through fieldwork that took place in December and January, near the official conclusion of the International Polar Year (IPY), the largest coordinated international scientific effort in five decades. Ceremonies marking the conclusion of IPY fieldwork will take place in Geneva, Switzerland on Feb. 25.

NSF is the lead U.S. agency for IPY. Through the Antarctic Program, NSF manages all  federally funded research on the southernmost continent.

Fully in the spirit of IPY, noted Detlef Damaske of Germany's Federal Institute for Geosciences and Natural Resources, teams of scientists, engineers, pilots and support staff from Australia, Canada, China, Germany, Japan, the U.K. and the U.S. pooled their knowledge, expertise and logistical resources to deploy two survey aircraft, equipped with ice-penetrating radar, gravimeters and magnetic sensors as well as the network of seismometers, an effort that no one nation alone could have mounted.

"This is a fantastic finale to IPY," added Ferraccioli.

Bell meanwhile, noted that AGAP is "emblematic of what the international science community can accomplish when working together."

In one of the most ambitious, challenging and adventurous 'deep field' Antarctic IPY expeditions, AGAP scientists gathered the terabytes of data needed to create images of the enigmatic Gamburtsevs, first discovered by Russian scientists in 1957 during the International Geophysical Year (IGY), the predecessor to IPY.

While the planes made a series of survey flights, covering a total of 120,000 square kilometers, the seismologists flew to 26 different sites throughout an area larger than the state of Texas using Twin Otter aircraft equipped with skis, to install scientific equipment that will run for the next year on solar power and batteries.

The seismology team, from Washington University, Penn State, IRIS, and Japan's National Institute of Polar Research,  also recovered ten seismographs that have been collecting data since last year over the dark Antarctic winter at temperatures as low as -73 degrees Celsius (-100 degrees Fahrenheit).

"The season was a great success," said Douglas Wiens, of Washington University in St. Louis.  "We recovered the first seismic recordings from this entire part of Antarctica, and operated seismographs over the Antarctic winter at temperatures as low as -100 F for the first time. Now, we are poring over the data to find out what is responsible for pushing up mountains in this part of Antarctica."