Not Just a Guy in a White Coat 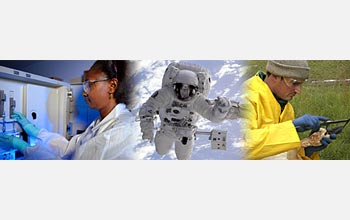 Science is revealed as dynamic and creative on the "Understanding Science" Web site.

Few would argue with the premise that some understanding of science is essential to making sense of the world today. Distinguishing between anecdotes and tested ideas means being able to draw on science and the scientific process to understand issues as varied as climate change, evolution and alternative energy.

Yet, many Americans' acquaintance with the scientific process is limited to a list they memorized from a textbook: Ask a question, form a hypothesis, conduct an experiment, collect data and draw a conclusion.

Just in time for the Year of Science 2009, a new Web site funded by the National Science Foundation offers a window to a better understanding about how dynamic and creative the scientific process really is.

Understanding Science, accessible at http://undsci.berkeley.edu/ is a collaborative project led by Roy Caldwell, a professor of integrative biology at the University of California Berkeley, along with colleague David Lindberg. The project's coordinator is Judy Scotchmoor, assistant director of the UC Museum of Paleontology at UC Berkeley.

With the contributions of "an astonishing set of advisers," Scotchmoor and her colleagues have developed a Web site that draws students into real-life examples--from the structure of DNA to advances in fueling technology to the discovery of insulin--to illustrate what science is and how it works. The site even offers a chance to evaluate pursuits such as astrology and apply a set of criteria to determine whether or not they constitute science.

The audience for the Web site is the general public as well as the educators (from kindergarten to undergraduate level) who are an essential part of young people's introduction to the scientific process and body of knowledge. Links to teacher resources include resources targeted to primary, middle school, high school and undergraduate-level educators. Instead of the five-part list representing a single scientific method in a textbook, there is an interactive chart showing how science works: the many motivations leading to exploration and discovery; the ways that ideas are tested out; the role of community analysis and feedback; and possible benefits and outcomes that result from scientific work.

Feedback from science teachers who have used the site have been very positive.

"Many of the teachers have a greater comfort level with science," said Scotchmoor. "They also noticed that their students were much more creative in how they approached problems, rather than saying, 'just tell me the steps and I'll do it.'"