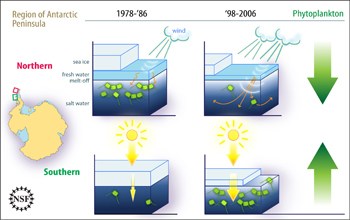 Fast climate change on the Antarctic Peninsula has affected the base of the food chain.

Scientists have long established that the Antarctic Peninsula is one of the most rapidly warming spots on Earth. Now, new research using detailed satellite data indicates that the changing climate is affecting not just the penguins at the apex of the food chain, but simultaneously the microscopic life that is the base of the ecosystem.

The research was published in the March 13 edition of Science magazine by researchers with the National Science Foundation's (NSF) LTER (Long Term Ecological Research) program. The LTER, which has 26 sites around the globe, including two in Antarctica, enables tracking of ecological variables over time, so that the mechanisms of climate change impact on ecosystems can be revealed. The specific findings were made by researchers with the Palmer LTER, using data collected near Palmer Station and from the research vessel Laurence M. Gould. Both Palmer Station and the Laurence M. Gould are operated by NSF's Office of Polar Programs.

Hugh Ducklow, of the Marie Biological Laboratory at  Woods Hole, the principal investigator for the Palmer LTER project, said that the new findings are scientifically significant, but they also are consistent with the climate trends on the Peninsula and other observed changes.

However, it took new scientific tools and analytical work by post-doctoral fellow Martin Montes Hugo to verify scientifically what scientists had been inferring from other changes for some time.

"I have to say the findings weren't a surprise; I think with the weight of all the other observations that we had on changes happening to organisms higher up in the food chain, we thought that phytoplankton weren't going to escape this level of climate change," Ducklow said. "But it took Martin to have all the right tools and the abilities to go in and do the analysis and prove what we suspected."

Those data, gathered over years, were essential to tracking patterns that supported the new findings.

"That's the beauty of the LTER program," he added.

Over the past 50 years, winter temperatures on the Peninsula have risen five times faster than the global average and the duration of sea-ice coverage has decreased. A warm, moist maritime climate has moved into the northern Peninsula region, pushing the continental, polar conditions southward.

As a result, the prevalence of species that depend on sea ice, such as Adelie penguins, Antarctic silverfish and krill, has decreased in the Peninsula's northern region, and new species that typically avoid ice, such as Gentoo and Chinstrap penguins, and lanternfish are moving into the habitat.

The LTER researchers show that satellite data on ocean color, temperature, sea ice and winds, indicate that phytoplankton at the base of the food chain are also responding to changes in sea-ice cover and winds driven by climate change. However, there are contrasting changes in northern and southern regions, and the satellite and ground-based data provide insights into the forcing mechanisms for each region.

The researchers weren't surprised that primary productivity in the waters of the Peninsula has changed dramatically over the last 20 years. But the contrasting changes in the north and south were a surprise.

In the north, where ice-dependent species are disappearing, sea ice cover has declined and wind stress has increased. The wind intensity and reduced sea ice causes greater mixing of the surface ocean waters. The result--a deepening of the surface mixed layer that lowers primary productivity rates and causes changes in phytoplankton species, because phytoplankton cells are exposed to less light.

Conversely, in the southern Peninsula waters, where ice-dependent species continue to thrive, the situation is reversed. There, sea ice loss has been in areas where it formerly covered most of the ocean surface for most of the year. Now, ice is less prevalent, exposing more water to sunlight and stimulating phytoplankton growth. The ice loss in the South, combined with less wind stress, promotes the formation of a shallower mixed layer, with increased light and the development of large phytoplankton cells, such as diatoms. Diatoms, single-celled creatures, form the base of the rich Antarctic food web that includes krill, penguins and whales.