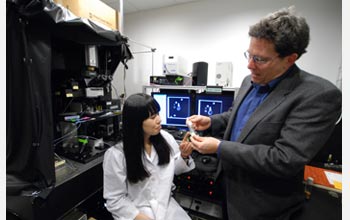 Try this at home: If fruit flies are buzzing around your kitchen, switch on your hairdryer and aim it at the flies. A gentle stream of air will stop them in their tracks, putting them in prime position for swatting.

The reaction of fruit flies to wind was something that had intrigued biologist David J. Anderson for some time. When the flies sensed the wind, they went into a defensive, hunkering-down position until the feel of the wind ceased, then resumed flying around.

With an interest in animals' defensive behavior and its evolutionary ties to emotion, Anderson became interested in the neural connections underlying the flies' response to wind. In a study described in the March 12 issue of the journal Nature, Anderson and his team zeroed in on how the flies process the feel of the wind and respond by freezing in place. They found that that the flies' wind-sensitive neurons exist in the same sensory organ in the flies' antennae as the neurons that process the sound of the song of a potential mate.

The next challenge was determining how the same organ processed two distinct stimuli, leading to two distinct behavioral responses. Anderson and his team, including graduate student Suzuko Yorozu, were able to dissect the neural circuits that underlie this defensive behavior and see a different set of neurons "light up" in response to wind versus the sound of courtship song.

The team mounted a fly upside down under a very powerful two-photon microscope. Cutting a hole in the cuticle--the shell that covers the fly's brain--the team had a detailed view into the fly's brain. Having used sophisticated techniques to selectively visualize the activity of particular genes in the fly, the researchers could see when any neurons in the fly's brain were activated by a particular stimulus.

"So we positioned a loudspeaker in front of the fly, and we delivered courtship sound recordings and wind, and as we did that we could watch in real time the neurons that were lighting up in the brain," said Anderson. "And it was absolutely obvious that neurons in different regions of the brain were being activated by the sound or activated by the wind, and these regions were different, even if we applied the two stimuli simultaneously."

This kind of detailed understanding of the neurons involved in defensive behavior has potential application to treatment of mental illnesses in humans, though Anderson admits this is a long way off. But knowing more about neural circuits could provide the means to target medications to precisely where they are needed, as opposed to treating the brain globally and prompting many unpleasant side-effects.

"To be able to pinpoint the parts of the brain that process behavior responses, including emotional responses would be very useful," said Anderson. "So that someday we'll be able to hone in in a more laser-like manner and be able to have drugs that are targeted to specific circuits in the brain."

For more on this research, go to http://mr.caltech.edu/media/Press_Releases/PR13240.html