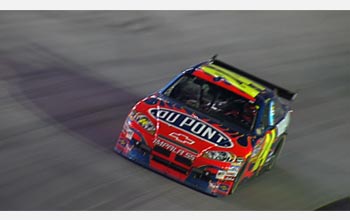 The No. 24 car illustrates the science of turning at 180 mph in a new NSF-sponsored video series.

Science educators have a new way to engage science students in grades 8-12; they can turn to NASCAR. A new online series of videos called "The Science of Speed"--announced today at the Texas Motor Speedway (TMS) in Fort Worth--teaches science by revealing the sophisticated science and engineering underlying NASCAR racing.

"By exploring the range and depth of science that goes into something as wildly popular as NASCAR, we hope to harness the passion of its fan base and reignite interest in science and engineering among teachers and students," says Jeff Nesbit, director of the National Science Foundation's (NSF) Office of Legislative and Public Affairs, the organization that spearheaded the project.

"NASCAR is built largely on principles of science that produce speed and safety, which is why this marriage makes so much sense. We're trying to tap into the demographics and enthusiasm of those who follow it and inspire them to learn about science."

To bring the 12-module science video series to computer screens, NSF teamed with: NASCAR, the largest sanctioning body of motorsports in the United States; Diandra Leslie-Pelecky, physics professor at the University of Texas at Dallas and author of "The Physics of NASCAR;" and Santa Fe Productions, Albuquerque, N.M.

In the series of high-quality, easy-to-understand videos, fast cars double as science experiments that illustrate basic concepts of friction, safety, sound and other elements of racing at speeds up to 200 miles per hour. Deftly guided onscreen by Leslie-Pelecky, viewers glimpse the intricacies of NASCAR's rarely seen science.

"All our technological advances in day-to-day life, which have made America the world's superpower, are built from science and engineering," said Brian Vickers, driver of the No. 83 Red Bull Toyota, who is featured in several segments. "But we've fallen behind, and in time, that will affect the economic and military strength of this nation. When schools are able to teach science to students in a way that they enjoy and can relate to it, they'll retain the information. I believe "The Science of Speed" can help," Vickers said declaring how proud he is to be part of the program.

According to a 2008 ESPN Sports Poll, 43 percent of adult NASCAR fans have children under the age of 18. Additionally, NASCAR is the second most popular sport on television among children under 18, according to Nielsen Media Research. This group of young people, particularly those ages 13 and above, is the audience that "The Science of Speed" videos are designed to reach.

Through the videos, NSF seeks to enhance students' critical thinking, problem solving, and innovative use of knowledge for next generation applications. The series brings outside-the-classroom examples into the classroom to teach science in an exciting and highly relatable way.

""The Science of Speed" does a great job in capturing NASCAR racing as an unfolding science experiment and making real scientific concepts come alive for students in an accessible way," said Steve Phelps, chief marketing officer for NASCAR.  "We are honored the National Science Foundation chose to explore the intricacy of NASCAR racing to further this very important cause--teaching science to the next generation of American scientists and engineers."

Teachers and students can download the videos for free from the NSF Web site at http://www.nsf.gov/news/special_reports/sos/ .

Drag & Drafting: Engine power is constrained at superspeedways like Daytona and Talladega, so teams use aerodynamics to gain an advantage. Teams adjust their cars to minimize drag, but then it's up to the drivers to find ‘the draft' and to trust the drivers behind them to literally "bump" them into Victory Lane.

Friction & Heat: Friction always creates heat.  Brakes and tires depend on friction to work, but more friction isn't always better. In the engine, friction is never good and engine builders use everything from oil to high-tech coatings to get a little extra horsepower.

Grip: There's one thing every driver always want more of: Grip. Grip is the frictional force that holds the tires on the track, but crew chiefs like Steve Letarte describe it as a 'warm and fuzzy feeling' when you have it. Whether mechanical or aerodynamic, more is always better.

Sound: "Loud is fast" Brian Vickers tells us, and speed is one reason race cars don't have mufflers. Experiencing a NASCAR race means feeling the roar of the engines as well as hearing them. It's all good--as long as you've got your ear protection.

Tires & Pressure: NASCAR tires don't have "air pressure" because they're filled with nitrogen. The culprit responsible for increasing tire pressure during a race is friction. Using dry nitrogen gas helps the team predict how hot the tire will get and how much the pressure will "build" during a race.

Turning: Anyone can go fast straight: The challenge is turning. It takes more than ten thousand pounds of force to get a racecar around Turn 3 at Texas Motor Speedway at 180 mph. All that force comes from four tiny patches of rubber--the only thing keeping the car on the track and out of the wall.

Power: 850 horses all lined up--that's how much power a NASCAR Sprint Cup engine has. The engine's job is to convert the energy in fuel to speed. NASCAR engines do it faster and more efficiently than passenger car engines.

Balance: A race car driver is like Goldilocks: The car always seems to be too loose or too tight. Getting the right balance is hard because the weight of the fuel changes and the tires wear during each green-flag run.  Understanding the science is how crew chiefs make the car "just right".

Momentum & Time: Increasing the time of a collision from a tenth of a second to two tenths of a second can make a huge difference in the number of G's a driver experiences. The car, the track, seat belts, and seat construction spread out the force of impact and save lives.

Load Transfer: NASCAR corners are divided into three parts because the car's grip changes in different parts of a turn. The higher center of gravity in the newest NASCAR race car challenges crew chiefs to minimize weight shift around a turn. Equipment like the seven-post rig helps, but the ultimate test is on the track.

Firesuits: "Frightening" is how Jeff Gordon describes fire, even though he knows he's protected head to toe (and right down to his underwear) by fire-resistant Nomex fabric. Firesuits and the associated gear don't just protect drivers from fire, though--they decrease the rate of heat transfer, giving the driver a little more time to move somewhere cooler.