Public events on April 4 and 5 focus on first-hand opportunities to experience art, culture and science from the Arctic and Antarctic 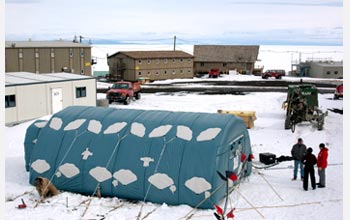 A portion of a prototype lunar habitat set up at McMurdo Station, Antarctica is featured.

Reporters can get a close-up look at a cylinder of ice more than 100,000 years old and a prototype lunar habitat that survived the rigors of a year in Antarctica during a media availability at the Maryland Science Center in Baltimore on April 3. This event also offers reporters a chance to speak to a Polar researcher and tour a gallery filled with artwork inspired by the rugged landscapes and cutting-edge science of the southernmost continent.

The Maryland Science Center will be the focal point of a range of public events April 4 and 5 that highlight federally funded Arctic and Antarctic research programs. The events are being held in conjunction with a meeting on the international treaty governing international cooperation and scientific research in Antarctica.

The Antarctic Treaty Consultative Meeting and the Polar Weekend also occur at the official close of the International Polar Year (IPY), which concentrated deployment into the polar regions by scientists from more than 60 countries. NSF was the lead U.S. agency for IPY, an effort that drew the participation of many federal agencies, including the National Aeronautics and Space Administration (NASA), the National Oceanic and Atmospheric Administration (NOAA) and the U.S. Geological Survey.