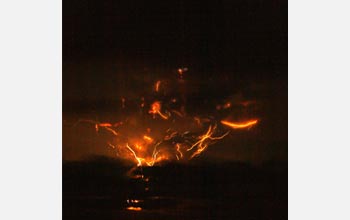 Scientists have pierced the veil of clouds around a volcanic plume to "see" lightning.

Researchers hit the jackpot in late March, when, for the first time, they began recording data on lightning in a volcanic eruption--right from the start of the eruption.

Using a multi-station, ground-based Lightning Mapping Array, the scientists advanced our understanding of electrical activity during a volcanic eruption.

Portable Lightning Mapping Arrays are now set up in several areas of the country, and are becoming increasingly used by meteorologists to issue weather warnings.

The arrays have been deployed at volcanoes only twice before.

Thousands of individual segments of a single lightning stroke can be mapped with the Lightning Mapping Array, and later analyzed to reveal how lightning initiates and spreads through a thunderstorm, or in a volcanic plume.

When Alaska's Redoubt Volcano started rumbling in January, a team of researchers hurried to set up a series of the arrays.

When the volcano erupted on March 22 and 23, 2009, the arrays returned dramatic information about the electricity created within volcanic plumes, and the resulting lightning.

"For the first time, we had the Lightning Mapping Array on site before the initial eruption," said scientist Sonja Behnke of New Mexico Tech.

"The data will allow us to better understand the electrical charge structure inside a volcanic plume," said scientist Ron Thomas of New Mexico Tech. "That should help us learn how the plume is becoming electrified, and how it evolves over time."

Bradley Smull, program director in the National Science Foundation (NSF)'s Division of Atmospheric Sciences, which funded the research, said the information will give scientists insights into the electrical mechanisms in both plumes above active volcanoes, and in lightning spawned in thunderstorms.

NSF awarded New Mexico Tech a grant to study volcanic lightning in 2007, with the University of Alaska at Fairbanks and the Alaska Volcano Observatory as collaborators.

"With data from the Lightning Mapping Array, new details of volcanic plume lightning will emerge," Smull said. "The opportunity for stand-alone analysis, and comparisons with last year's similar observations of Chaiten Volcano in Chile, will tell us much more about this phenomenon."

Advance warning was critical to the mission.

Then in March, "this volcano, in the space of a week, had several major eruptions that produced prolific lightning," Krehbiel said.

The four Lightning Mapping Array stations are located along the east side of Cook Inlet, across from the volcano.

Thomas, Krehbiel, Behnke and McNutt found cooperative people in accessible locations to serve as caretakers for the stations: The northernmost sensor is at a school teacher's house in Nikiski. The second is at a fire station south of Kenai. A third is at Clam Gulch Lodge. The southernmost and fourth sensor is at a public school in Ninilchik.

In addition to the Lightning Mapping Array, the AVO is gathering data from 11 local seismic stations, two infrasound arrays and two radar stations.

"It's hard to get the sensors set up before a volcano erupts," said Thomas. "You plan--and hope you can do something like this once in a lifetime."

The Redoubt eruptions are not over yet. After quieting down and appearing to go into a dome-building phase, just before sunrise this past Saturday the volcano blew its top in the biggest eruption so far.

"The lightning  activity was as strong or stronger than we have seen in large midwestern thunderstorms," Krehbiel said. "The radio frequency noise was so strong and continuous that people living in the area would not have been able to watch broadcast VHF television stations."