Desert Woodrats Switch One Dietary Poison for Another 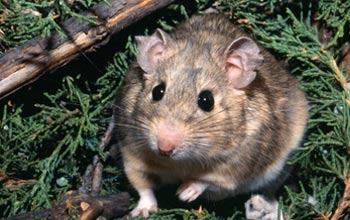 A woodrat in Utah's Great Basin is surrounded by toxic juniper leaves, which is much of its diet.

As the U.S. Southwest grew warmer between 18,700 and 10,000 years ago, juniper trees vanished from what is now the Mojave Desert, robbing woodrats of their favorite food.

Now biologists have narrowed the hunt for detoxification genes that let the rodents eat the toxic creosote bushes that replaced junipers.

"It was either eat it or move out," says biologist Denise Dearing of the University of Utah, lead author of a paper detailing the results, published on-line on April 7, 2009, in the journal Molecular Ecology.

"This is an excellent example of research that bridges the fields of ecology and physiology," says Mary Chamberlin, acting deputy division director of the National Science Foundation (NSF)'s Division of Integrative Organismal Systems, which funded the research.

"It underscores the importance of studying organismal biology in order to understand how animals may or may not adapt to changes in their ecosystems."

During the study, eight woodrats were captured from each of two western regions: the Mojave Desert and the cooler Great Basin. Rats from both areas were fed rabbit chow mixed with either creosote or juniper.

The scientists then scanned the rodents' genetic blueprints to look for active genes known as "biotransformation genes" because they produce liver enzymes to detoxify the poisons in creosote and the less-toxic juniper.

"We found 24 genes in woodrats from the Mojave Desert that could be key in allowing them to consume leaves from creosote bushes," Dearing says. "The leaves are coated with a toxic resin that can comprise up to 24 percent of the dry weight of the plant."

She conducted the study because "we don't really know how herbivores can feed on toxic diets. If we can understand it, we may be able to learn how they will deal with climate change.

"For example, the toxins in creosote could respond to increases in atmospheric carbon dioxide," she says. "The plants may make more toxins under increased carbon dioxide conditions."

Even with detoxification genes, creosote bush is so toxic the woodrats can eat only so much. When they eat it exclusively, in winter, they lose weight. In spring, they gain weight when they also eat other plants.

Juniper is also toxic, but not as much as creosote bush.

Before creosote came to the Southwest from South America, woodrats ate juniper throughout what is now the Great Basin of Utah and Nevada and the Mojave Desert of southwestern Utah, southern Nevada and inland southeastern California.

But things changed as the last Ice Age waned.

As the glaciers receded, creosote bush invaded. The Southwestern deserts formed as the land became hotter and drier, and creosote bush replaced juniper trees in those areas.

Dearing says that as creosote invaded, some woodrats already had genes to let them eat creosote, or there was a mutation in existing detoxification genes that allowed for creosote consumption.

Over time, Mojave woodrats with those genes were more likely to survive on creosote, while those in the Great Basin stuck to juniper.