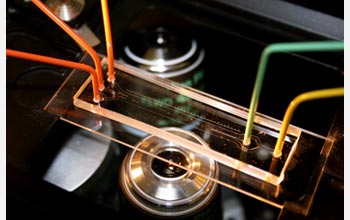 This microfluidic device was used to discover new information about marine bacteria.

Scientists studying how marine bacteria move have discovered that a sharp variation in water current segregates right-handed bacteria from their left-handed brethren, impelling the microbes in opposite directions.

This finding and the possibility of quickly and cheaply implementing the segregation of two-handed objects in the laboratory could have a big impact on industries like the pharmaceutical industry, for which the separation of right-handed from left-handed molecules can be crucial to drug safety.

"This is a remarkable example of how basic research, initially focused on understanding how bacteria interact with their environment, can lead to discoveries far beyond that envisioned," said David Garrison, director of the National Science Foundation (NSF)'s Biological Oceanography Program, which funded the research.

While single-celled bacteria do not have hands, their helical-shaped flagella spiral either clockwise or counter-clockwise, making opposite-turning flagella similar to human hands in that they create mirror images of one another.

This two-handed quality is called chirality, and in a molecule, it can make the difference between healing and harming the human body.

"This discovery could impact our understanding of how water currents affect ocean microbes, particularly with respect to their ability to forage for food, since chiral effects make them drift off-course," said Roman Stocker, a marine scientist at MIT and lead investigator on the research project. "But it is also important for several industries that rely on the ability to separate two-handed molecules."

Stocker and graduate student Marcos, along with co-authors Henry Fu and Thomas Powers of Brown University, published their findings in the April 17 issue of the journal Physical Review Letters.

One of the best-known instances of a chiral molecule causing widespread harm occurred in the 1950s, when the drug thalidomide was given to pregnant women to prevent morning sickness.

In their paper, the researchers describe how they designed a microfluidic environment--a device about the size of an iPod nano that has channels containing water and bacteria--to create a "shear" flow of layers of water moving at different speeds.

In their tests, Stocker and Marcos used a non-motile mutant of the bacterium Leptospira biflexa, whose entire body has the shape of a right-handed helix.They injected the Leptospira into the center of the microfluidic device and demonstrated that the bacteria drift off-course in a direction dictated by their chirality.

The researchers also developed a mathematical model of the process, and are implementing this new approach to separate objects at molecular scales.

"While we still have a way to go to separate actual chiral molecules, we think our work is very promising for the agriculture, food and pharmaceutical industries."