Shedding Some Light on Parkinson's Treatment 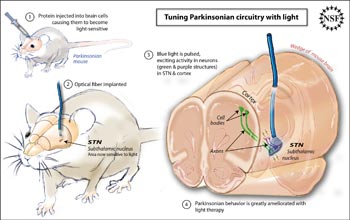 A research team lead by Karl Deisseroth in the bioengineering department at Stanford University has developed a technique to systematically characterize disease circuits in the brain. By precisely controlling individual components of the circuit implicated in Parkinson's disease, the team has identified a specific group of cells as direct targets of deep brain stimulation (DBS), a Parkinson's treatment.

Termed optogenetics, the NSF-funded technology uses light-activated proteins, originally isolated from bacteria, in combination with genetic approaches to control specific parts of the brain. The technique is a vast improvement over previous methods because it allows researchers to precisely stimulate neurons and measure the effect of treatment simultaneously in animals with Parkinson's-like symptoms.

Published in the April 17 issue of Science, Deisseroth's team found they could reduce disease symptoms by preferentially activating neurons that link to the subthalamic nucleus region of the brain. First, these specific cells were treated in a way that made them sensitive to stimulation by blue light, then the team implanted an optical fiber in the brain.

When researchers rapidly flashed blue light inside the animals' brains the disease symptoms improved. In contrast, treating with slower flashes of light actually made the symptoms worse, and targeting other kinds of cells had no effect at all, indicating both proper cell type and stimulation frequency are crucial components of effective treatment. Flashing blue light on portions of the same neurons found closer to the outer surface of the brain had an effect similar to treatment deep within the brain, raising the possibility that researchers may be able to develop treatments that are less invasive than current options.

Approved as a medical treatment in 1997, DBS remains controversial because it doesn't work on all patients. Used to treat Parkinson's disease, depression and movement disorders, DBS involves surgical implantation of a brain pacemaker, which sends electrical impulses into the brain. In the past, researchers have been unable to understand the effective mechanism of DBS because the electrical signal emitted by DBS devices interferes with the ability to observe brain activity.

Explains Deisseroth, "The brain is an electrical device, but it is a very complicated device. Think of it as an orchestra without sections: all of the types of instruments, or cells, are mixed together. Treatments like DBS are unrefined, in that they stimulate all of the cells or instruments. The optogenetic approach allows us to control stimulation of specific cells in the brain on the appropriate timescale, much like a conductor directing specific sections of an orchestra at the appropriate time."

Production of new therapies is always a long-term goal, but for now Deisseroth and his group are focused on mapping disease circuits and understanding brain function. "We need to understand the players before we can develop effective treatment strategies," he stated.