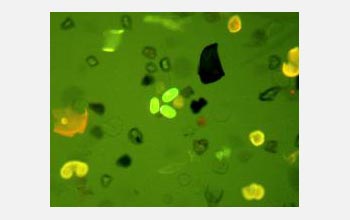 Microscopic cysts of Alexandrium species in yellow and green in Gulf of Maine sediments.

The potential for an outbreak of the phenomenon called "red tide" is expected to be moderately large this spring and summer in the Gulf of Maine, according to researchers at the Woods Hole Oceanographic Institution (WHOI) and North Carolina State University (NCSU).

The finding is based in part on a regional seafloor survey of quantities of Alexandrium fundyense--the microscopic algae notorious for producing a toxin that accumulates in clams, mussels and other shellfish and that can cause paralytic shellfish poisoning (PSP) in humans who consume them.

The research was supported by the National Science Foundation (NSF), NOAA and the National Institutes of Health.

"These studies of Alexandrium, supported by NSF for more than a decade, have resulted in a near-predictive capability for red tides in this region," said David Garrison, director of NSF's Biological Oceanography Program.  "Basic research that transitions into products important in management decisions showcases successful interagency partnerships like this one."

Survey maps of the harmful algae are used with computer models that simulate different scenarios of weather and oceanographic conditions to indicate where and in what abundance the toxic algae might be expected in 2009.

The researchers found concentrations of Alexandrium cysts--the dormant seed-like stage of the algae's life cycle--in the Gulf of Maine to be 40 percent lower than the historically high levels observed prior to last year's bloom, but still higher than the level preceding a major regional bloom in spring 2006 that closed shellfish beds from Canada to Massachusetts Bay.

Fall concentrations of Alexandrium cysts are one of the indicators of the magnitude of a potential bloom in spring.

In October 2008, a survey team led by Don Anderson, a biologist at WHOI and principal investigator of the Gulf of Maine Toxicity (GOMTOX) study, spent 10 days collecting seafloor sediment samples between Massachusetts Bay and the Bay of Fundy, looking for Alexandrium cysts.

After the samples were processed and analyzed, the team determined the cyst abundance to be about 40 percent lower than the high levels observed in fall 2007.

This is one line of evidence that leads Anderson and his colleagues to believe the bloom this spring won't be as extensive as last year's, which closed shellfish beds from the Canadian border to the Cape Cod Canal, and on the outer portions of Cape Cod.

"Last year at this time, we issued an advisory for a very large regional bloom that did in fact occur," said Anderson. "In hindsight, that was ‘easy' because the cyst concentrations were higher than we had ever seen--30 percent higher than in 2004 just before the massive 2005 red tide.

"It's more difficult to make a prediction this year because the numbers of cysts we found are not extreme."

The cysts for this year's bloom have been dormant in the seabed since late last summer, when they were formed at the end of the Alexandrium bloom. With the onset of spring and its warm temperatures and increased light, the cysts are already beginning to germinate, liberating cells that swim to the surface waters.

Under the right conditions, a single cell can then divide into several hundred cells within a few weeks.

But where and when the resulting bloom will make landfall depends on weather events that cannot be predicted months in advance.

That's where computer modeling can help. While cyst abundance gives a general indication of the magnitude of the bloom, oceanographers Dennis McGillicuddy of WHOI and Ruoying He of NCSU have been working with Anderson to better understand the growth and transport of the toxic cells using computer models.

They've developed a computer simulation that incorporates weather conditions, river runoff and various wind and current patterns to predict the intensity and location of blooms in the Gulf of Maine.

The simulations suggest a moderately large regional bloom of Alexandrium, falling in the mid-range of those that have occurred over the last five years.

"We can only issue an advisory, as opposed to a forecast," says Anderson. "We can estimate how many cells will be in the water from the germination of cysts and potential growth of that population, but not whether those cells will be blown to shore.

Advance warning of a potentially troublesome year for harmful algae can give shellfish farmers and fishermen time to make contingency plans for the timing of their harvest or expansion of aquaculture beds.

State agencies can make informed staffing decisions to accommodate additional monitoring that might be required to protect public health and the shellfish industry.

The WHOI and NCSU researchers underscore that even when these major red tides occur, shellfish and other seafood products are safe to eat because they are carefully monitored.

Shellfish stocks are regularly tested by state and federal agencies, ensuring that contaminated growing areas are closed to harvesting, and that dangerous products don't reach the marketplace.