Autonomous vehicle developed by the University of Washington is an element of Arctic Observing Network, an International Polar Year research priority 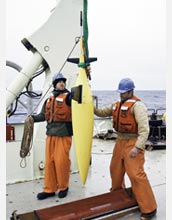 A seaglider is prepared for deployment in Davis Strait.

View a video of the seaglider and an interview with Craig Lee of the University of Washington.

An intelligent, ocean-going glider has spent six months on a record-breaking deployment to sample the icy waters off western Greenland. The samples will contribute to the longest continuous measurement of Arctic currents that help to drive ocean circulation and regulate global seawater temperatures.

The 49-kilogram (110-pound) seaglider, developed and deployed by researchers at the University of Washington, measured fresh water leaving the Arctic Ocean through the Canadian Arctic Archipelago and Davis Strait and entering the Labrador Sea.

Scientists are concerned that Arctic climate change and increased fresh-water runoff are affecting the formation of very dense water in the Labrador Sea. That dense, cold water is a critical component driving the circulation of the world's oceans, according to Craig Lee, a principal oceanographer with the University of Washington's Applied Physics Laboratory (APL).

The seaglider is one of more than 35 projects that are part of NSF's Arctic Observing Network (AON), which is meant to track and understand Arctic environmental change using an integrated suite of tools ranging from ocean buoys to satellites. Under-ice gliders might one day be among a suite of devices under the ice-covered high Arctic.

AON was one of NSF's primary research thrusts for the International Polar Year (IPY), which ended in late March. IPY was a 24-month deployment by scientists from 60 countries around the world to better understand the physical characteristics of the Polar Regions, their role as regulators of global climate and the nature of the changes occurring their as global temperatures rise. In the Arctic, scientists and Native communities also worked together not only to understand the changes themselves, but also the effects of change on subsistence lifestyles.

NSF was the lead U.S. agency for IPY.

The seaglider project was an international cooperative that included Richard Moritz, Kate Stafford and Beth Curry of APL; Brian Petrie, of the Bedford Institute of Oceanography in Canada; and Kunuk Lennert and other scientists with the Greenland Institute of Natural Resources.

Seagliders developed by the university's School of Oceanography and APL  are small, reusable underwater vehicles meant to operate on their own, gliding without propellers from the surface to as deep as 1,000 meters (3,300 feet), while collecting information about temperature, salinity and level of dissolved oxygen. When seagliders are at the ocean surface they can be commanded remotely from nearly anywhere in the world via the Internet and can transmit their data via satellite telephone.

The University of Washington group is the first and only one in the world sending gliders under the ice. With NSF support, the university has developed a glider with enough artificial intelligence to be able to:

Unlike faster-moving propeller-driven autonomous underwater vehicles (AUVs), which may need to be retrieved by ships only days after being deployed, the seagliders can operate on their own for months at a time.

The ability to do so under ice, developed by Lee's group, is important in a place such as Davis Strait where scientists want to measure how much fresh water flows through the strait and at what times of year so they have a baseline for comparison in coming years.

Early development of the university's seagliders was paid for by the Office of Naval Research. NSF funded work to add an under-ice capability to the glider to expand its capabilties and improve its ability to take samples in hostile Arctic waters.

"This cutting-edge technology has the potential to make year-round measurements over broad areas where access by other means is severely limited, due to the presence of sea ice for part or all of the year," according to Martin Jeffries, NSF's AON program director.

Moorings--strings of instruments tethered to the seafloor--are also monitoring water in the Davis Strait but are not ideal for detecting plumes of fresh water, Lee says. For one thing, the freshest water is often found in a thin layer about 50 meters (164 feet) thick just under the sea ice. Tethering an instrument atop a mooring so it reaches that thin layer puts the instrument at risk of being ruined if an especially thick, low-hanging piece of ice comes along and strikes it.

Seagliders pass through that upper 50 meters as they dive from the top to the bottom of the strait and so can supply data in places that instruments on the mooring can't, Lee says.

In the latest deployment, two APL seagliders went into the water on Sept. 5, 2008. They relied on five sound sources in Davis Strait to figure out where they were and navigate once under the ice.

One operated for 25 weeks, spending 51 days and traveling more than 724 kilometers (450 miles) under the ice, before being collected Feb. 26 by the Danish Navy. During under-ice operations, the glider periodically sought small openings in the ice cover and succeeded in surfacing 10 times to transmit data. It made two round trips under the ice of about 370 kilometers (230 miles) each. Its journey was not as direct as desired on some legs because of weak signals from the navigation beacon and a now-known bug in the glider's navigation system, Lee says. Still it collected an unprecedented record of fresh water moving through the strait.

The second glider operated as if it were in the open ocean because it dipped under the ice just before operators activated its "under-ice" mode.  It therefore operated as if there were no ice overhead, trying to surface and, once it found a hole in the ice, stubbornly transmitting all of its data. To avoid freezing into the ice, gliders operating in "under-ice" mode stay only a brief time at the surface before diving back into the ocean. This glider tarried too long became frozen in the ice and was likely subsequently crushed as it was carried with the ice in the Baffin Island Current.