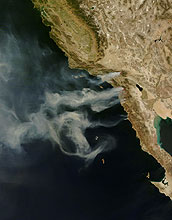 Smoke from Southern California wildfires billows over the Pacific Ocean.

Listen to a teleconference with three experts on fire and Earth systems.

Fire must be accounted for as an integral part of climate change, according to 22 authors of an article published in the April 24 issue of the journal Science. The authors determined that intentional deforestation fires alone contribute up to one-fifth of the human-caused increase in emissions of carbon dioxide, a heat-trapping gas that increases global temperature.

The work is the culmination of a meeting supported by the Kavli Institute for Theoretical Physics (KITP) and the National Center for Ecological Analysis and Synthesis (NCEAS), both based at the University of California, Santa Barbara and funded by the National Science Foundation (NSF).

The authors call on the Intergovernmental Panel on Climate Change (IPCC) to fully integrate fire into their assessments of global climate change, and consider fire-climate feedbacks, which have been largely absent in global models.

The article ties together various threads of knowledge about fire, which have, until now, remained isolated in disparate fields including ecology, global modeling, physics, anthropology and climatology.

Increasing numbers of wildfires are influencing climate as well, the authors report. "The tragic fires in Victoria, Australia, emphasize the ubiquity of recent large wildfires and potentially changing fire regimes that are concomitant with anthropogenic climate change," said David Bowman of the University of Tasmania. "Our review is both timely and of great relevance globally."

Carbon dioxide is the most important and well-studied greenhouse gas that is emitted by burning plants. However, methane, aerosol particulates in smoke, and the changing reflectance of a charred landscape each contribute to changes in the atmosphere caused by fire. Consequences of large fires have huge economic, environmental, and health costs, report the authors.

The authors state, "Earth is intrinsically a flammable planet due to its cover of carbon-rich vegetation, seasonally dry climates, atmospheric oxygen, widespread lightning and volcano ignitions. Yet, despite the human species' long-held appreciation of this flammability, the global scope of fire has been revealed only recently by satellite observations available beginning in the 1980s."

They note, however, that satellites cannot adequately capture fire activity in ecosystems with very long fire intervals, or those with highly variable fire activity.

Jennifer Balch, a member of the research team and a postdoctoral fellow at NCEAS, explains that there are bigger and more frequent fires from the western U.S. to the tropics. There are "fires where we don't normally see fires," she said, noting that it is in the humid tropics that a lot of deforestation fires are occurring, usually to expand agriculture or cattle ranching. "Wet rainforests have not historically experienced fires at the frequency that they are today. During extreme droughts, such as in 97-98, Amazon wildfires burned through 39,000 square kilometers of forest."

Balch explains the importance of the article: "This synthesis is a prerequisite for adaptation to the apparent recent intensification of fire feedbacks, which have been exacerbated by climate change, rapid land cover transformation, and exotic species introductions--that collectively challenge the integrity of entire biomes."

The authors acknowledge that their estimate of fire's influence on climate is just a start, and they highlight major research gaps that must be addressed in order to understand the complete contribution of fire to the climate system.

Balch notes that a holistic fire science is necessary, and points out fire's true importance. "We don't think about fires correctly," she said. "Fire is as elemental as air or water. We live on a fire planet. We are a fire species. Yet, the study of fire has been very fragmented. We know lots about the carbon cycle, the nitrogen cycle, but we know very little about the fire cycle, or how fire cycles through the biosphere."

"The large and diverse group of authors on this paper typifies an increasing trend across many sciences," said Henry Gholz, an NSF program director. "NSF explicitly supports this by funding "synthesis centers," such as NCEAS and KITP. Instead of focusing on generating new data, these centers synthesize the results of literally thousands of completed research projects into new results, theories and insights. The conclusions of this paper--that fire is important to the global carbon cycle and global climate, and that our ignorance about fire at this scale is vast--and could not have otherwise been obtained."