Students Least Informed about Environmental Science Are Most Optimistic 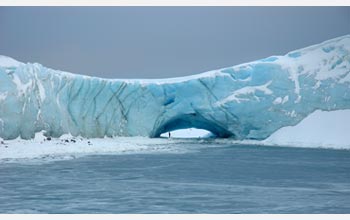 A person stands underneath a natural arch in a glacier at Norsel Point, Anvers Island, Antarctica.

Will problems associated with environmental issues improve in the next two decades? According to an analysis of student performance on PISA 2006--an international assessment of 15-year-olds--students who are the best informed about environmental science and the geosciences are also the most realistic about the environmental challenges facing the world in the next 20 years. Meanwhile, students who are least informed in these areas are the most wildly optimistic that things will improve.

These attitudes are among the results presented in Green at 15?, a study done by sociologist David Baker and colleagues at Pennsylvania State University, in collaboration with a team of researchers at the Organisation for Economic Co-operation and Development, or OECD, an international organisation that helps governments tackle the economic, social and governance challenges of a globalised economy. A PISA assessment is done every three years. PISA 2006 focused on science, assessing the knowledge and skills of more than 400,000 students in 57 countries around the world.

"PISA is a very large study, and there is a lot of material that's not covered in their final report," Baker said. "It seemed to me that, given all the attention the environment has captured, it would be useful to know what 15-year-olds know and think about the environment, particularly environmental science and geoscience."

The report looks at two broad areas: achievement, or "scientific literacy," and students' attitudes about the environment. In the area of achievement, American students' performance was typical of other PISA assessments, with scores in the middle of the pack.

The assessment used a combination of multiple choice and fill-in-the-blank questions to give students an opportunity to analyze and interpret data. For example, a question on the Greenhouse Effect included graphs showing carbon dioxide emissions and the average temperature of Earth's atmosphere over time and asked students what information in the graphs supported a relationship between temperatures and carbon dioxide emissions.

Seventeen percent of American students demonstrated the highest level of proficiency (referred to as Level A), indicating that they could consistently identify, explain and apply scientific knowledge to a variety of environmental topics. They also demonstrated the ability to link different information sources and explanations and use evidence from those sources to justify decisions about environmental issues. At the other end of the spectrum, 42 percent of American students performed at or below Level D. Students at this level showed difficulties answering questions containing scientific information relevant to basic environmental phenomena or issues.

In another finding, 55 percent of participating U.S. schools had a specific course in environmental science, compared with 21 percent of such courses in schools in OECD member countries. In other countries this content is sometimes captured in geography class, a less common course in the U.S. According to Baker, these are good results for environmental educators to consider here in the U.S.

"The publication of this new study should inform school systems about how well they are doing in addressing important scientific issues about our earth and its environment," said Larry Suter, program manager at the National Science Foundation. "This report has applied the methods of scientific investigation to the study of a topic of concern to educators, scientists, and the general public."

Green at 15? can be ordered or downloaded from the OECD Web site.