"Fantastic Voyage" Not So Far-fetched 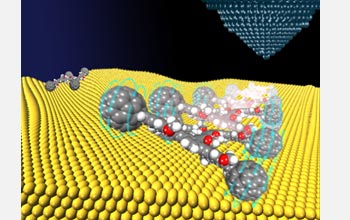 A new paper published in the May 2009 issue of the oldest continuously published magazine in the United States, Scientific American, asks readers to imagine producing vehicles so small they would be about the size of a molecule and powered by engines that run on sugar. To top it off, a penny would buy a million of them.

The concept is nearly unthinkable, but it's exactly the kind of thing occupying National Science Foundation supported researchers at Penn State and Rice universities.

For several years, Ayusman Sen, who heads Penn State's department of chemistry, and his colleague Thomas E. Mallouk, director of the Center for Nanoscale Science at Penn State, have investigated technologies that could realize these remarkable machines whose uses might include delivering medicine to specific tissue, accomplishing surgeries or communicating with the outside world from inside the human body.

Though researchers consistently have improved ways to build nano-machines, the stumbling block has been finding a way to power them. Shrinking energy producers--internal combustion engines, electric motors or jet engines--below millimeter dimensions is not an easy task, but researchers may be closer to a fantastic solution.

In the 1966 movie Fantastic Voyage, scientists shrink a submarine to microscopic size and inject it into the blood stream of a brilliant scientist, who has a blood clot forming in his brain. The nano-sized surgeons then set out to remove the blood clot.

Today, researchers can steer nano-machines, use them to convey cargo, and guide them using electromagnetic forces or chemical interactions. All of this, they say, makes the world seen in Fantastic Voyage not so far-fetched.