Video Available: A Celebration of the International Polar Year

The event was held April 6, 2009, at the National Academy of Sciences 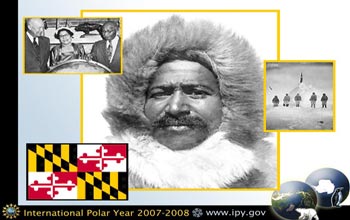 On Monday, April 6, 2009, the National Academy of Sciences (NAS) and the National Science Foundation (NSF) jointly hosted a celebration of the early research accomplishments of the International Polar Year (IPY) 2007-2008.

IPY fieldwork, a two-year deployment of scientists from more than 60 nations into the polar regions, officially concluded on March 1, 2009, but science results from IPY-funded research can be expected to be published for many months and even years to come.

The U.S. National Committee for IPY, established by the Academy's Polar Research Board, formulated the vision for U.S. participation in IPY.

The afternoon seminar at the Academy was held in conjunction with a morning event organized by the U.S. Department of State related to the Antarctic Treaty Consultative Meeting, a joint meeting of the Arctic Council and a commemoration of the 50th anniversary of the signing of the landmark Antarctic Treaty, which sets Antarctica aside as a continent for peaceful uses and for scientific research.

The IPY event was attended by officials from many of the nations involved in the Treaty meeting and the Arctic Council.

As noted by Arden L. Bement, Jr., NSF director, in his opening remarks, the IPY celebration occurred exactly 100 years to the day after U.S. explorer Matthew Henson became the first person to stand at the North Pole. Henson, a native of Maryland, was a member of the expedition led by Adm. Robert E. Peary. Henson was belatedly honored by the nation for his achievement and is buried at Arlington National Cemetery.

The agenda for the afternoon celebration included:

A welcome by James White, chair of the Polar Research Board. Opening remarks by Ralph J. Cicerone, president of the National Academy of Sciences and Bement, followed by six 20-minute talks about various aspect of IPY research.

Karl A. Erb, director of NSF's Office of Polar Programs, and David Bromwich, of Ohio State University, introduced the speakers, who included: