Scientific drilling vessel to dock in Honolulu harbor, May 5-9, 2009 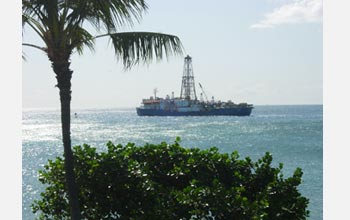 Hawaii will soon welcome the "JR" into port.

The drillship JOIDES Resolution ("JR") has returned to international operations, and will make a port call in Honolulu, Hawaii, May 5-9, 2009.

When it arrives, an international team of scientists studying seafloor sediments will have completed the first of two nine-week Integrated Ocean Drilling Program (IODP) expeditions to the equatorial Pacific Ocean.

After more than two years of rebuilding, the JR has new capabilities that include an upgraded sub-sea camera system, improved core handling capability, and new core research stations and software, among others.

The forward half of the ship, including berthing areas, galley, science laboratories and core processing areas are all new.

The National Science Foundation (NSF), the University of Hawaii at Manoa's School of Ocean & Earth Sciences & Technology (SOEST), and the Integrated Ocean Drilling Program-US Implementing Organization will welcome guests to the ship on Wednesday, May 6, 2009.

"I am very proud and excited to see the JOIDES Resolution back in action--providing the world's science community with unique information essential for unlocking the evolution of our planet, and providing the framework for understanding our future changing climate," said Robert Gagosian, president of the Consortium for Ocean Leadership.

"Having twice sailed as an ocean drilling expedition co-chief scientist, I'm especially pleased to see the lab upgrades and return to operations of this amazing educational asset," said Brian Taylor, dean of SOEST.

IODP is an international marine research program dedicated to advancing scientific understanding of the Earth through drilling, coring, and monitoring the subseafloor.

The program operates three drilling platforms: Chikyu, a riser-equipped vessel provided by Japan; the JOIDES Resolution, the newly refurbished research vessel provided by the United States; and mission-specific drilling platforms, such as jack-up rigs similar to those that drill for oil in the Gulf of Mexico, managed by ECORD, the European Consortium for Ocean Research Drilling.

During the first week of May 2009, all three platforms will be conducting investigations.

The Chikyu will disembark from Shingu in Japan for the Nankai Trough Seismogenic Experiment (NanTroSEIZE), a multi-expedition drilling project focused on an earthquake-generating zone.

The JOIDES Resolution will continue the Pacific Equatorial Age Transect (PEAT) Expedition, sampling Pacific Ocean sediments and studying the transition from climates that existed 15-50 million years ago to today's conditions. Scientists aboard the JR will investigate warm periods in Earth's history that share many features with the warm period Earth is currently entering.

ECORD, through its operator the British Geological Survey, will core continental shelf sediments off New Jersey to study changes in sea-level from 14 million to 24 million years ago.