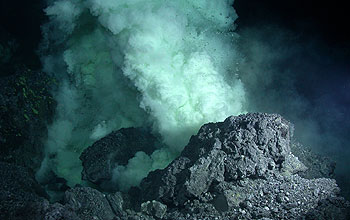 Scientists who have just returned from an expedition to an erupting undersea volcano near the Island of Guam report that the volcano appears to be continuously active, has grown considerably in size during the past three years, and its activity supports a unique biological community thriving despite the eruptions.

An international science team on the expedition, funded by the National Science Foundation (NSF), captured dramatic new information about the eruptive activity of NW Rota-1.

"This research allows us, for the first time, to study undersea volcanoes in detail and close up," said Barbara Ransom, program director in NSF's Division of Ocean Sciences, which funded the research. "NW Rota-1 remains the only place on Earth where a deep submarine volcano has ever been directly observed while erupting."

Scientists first observed eruptions at NW Rota-1 in 2004 and again in 2006, said Bill Chadwick, an Oregon State University (OSU) volcanologist and chief investigator on the expedition. This time, however, they discovered that the volcano had built a new cone 40 meters high and 300 meters wide.

"That's as tall as a 12-story building and as wide as a full city block," Chadwick said. "As the cone has grown, we've seen a significant increase in the population of animals that lives atop the volcano. We're trying to determine if there is a direct connection between the increase in the volcanic activity and that population increase."

Animals in this unusual ecosystem include shrimp, crab, limpets and barnacles, some of which are new species.

"They're specially adapted to their environment," said Chadwick, "and are thriving in harsh chemical conditions that would be toxic to normal marine life.

"Life here is actually nourished by the erupting volcano."

Verena Tunnicliffe, a biologist from the University of Victoria, said that most of the animals are dependent on diffuse hydrothermal venting that provides basic food in the form of bacterial filaments coating the rocks.

"It appears that since 2006 the diffuse venting has spread and, with it, the vent animals," Tunnicliffe said. "There is now a very large biomass of shrimp on the volcano, and two species are able to cope with the volcanic conditions."

"The 'Loihi' shrimp has adapted to grazing the bacterial filaments with tiny claws like garden shears," said Tunnicliffe. "The second shrimp is a new species--they also graze as juveniles, but as they grow to adult stage, their front claws enlarge and they become predators."

The Loihi shrimp was previously known only from a small active volcano near Hawaii--a long distance away. It survives on the fast-growing bacteria and tries to avoid the hazards of the volcanic eruptions. Clouds of these shrimp were seen fleeing volcanic bursts.

The other species attacks the Loihi shrimp and preys on marine life that wanders too close to the volcanic plumes and dies. "We saw dying fish, squid, etc., raining down onto the seamount, where they were jumped on by the volcano shrimp--a lovely adaptation to exploiting the noxious effects of the volcano," Tunnicliffe said.

The new studies are important because NW Rota-1 provides a one-of-a-kind natural laboratory for the investigation of undersea volcanic activity and its relation to chemical-based ecosystems at hydrothermal vents, where life on Earth may have originated.

"It is unusual for a volcano to be continuously active, even on land," Chadwick pointed out.

"This presents us with a fantastic opportunity to learn about processes we've never been able to directly observe before," he said. "When volcanoes erupt in shallow water they can be extremely hazardous, creating huge explosions and even tsunamis. But here, we can safely observe an eruption in the deep ocean and learn valuable lessons about how lot lava and seawater interact."

Chadwick said that volcanic plumes behave completely differently underwater than on land, where the eruption cloud is filled with steam and ash, and other gases are invisible.

"In the ocean, any steam immediately condenses and disappears and what is visible are clear bubbles of carbon dioxide and a dense cloud made of tiny droplets of molten sulfur, formed when sulfur dioxide mixes with seawater," Chadwick said. "These volcanic gases make the eruption cloud extremely acidic--worse than stomach acid--which is another challenge for biological communities living nearby."

Ocean acidification is a serious concern because of human-induced carbon dioxide accumulating in the atmosphere. "Submarine volcanoes are places where we can study how animals have adapted to very acidic conditions," Chadwick said.

During the April 2009 expedition, aboard the University of Washington's R/V Thompson, the scientists made dives with Jason, a remotely operated vehicle (ROV) operated by the Woods Hole Oceanographic Institution.

Chadwick said that "it was amazing how close Jason can get to the eruptive vent because the pressure at a depth of 520 meters [about 1,700 feet] in the ocean keeps the energy released from the volcano from becoming too explosive." Some of the most intriguing observations came when the volcano slowly pushed lava up and out of the erupting vent.

"As this was happening, the ground in front of us shuddered and quaked, and huge blocks were bulldozed out of the way to make room for new lava emerging from the vent," Chadwick said.

Part of the evidence that the volcano is in a constant state of eruption comes from an underwater microphone--or hydrophone--that was deployed a year ago at NW Rota-1 by OSU geologist Bob Dziak.

The hydrophone "listened" for the sounds of volcanic activity. The data it recorded clearly show that the volcano was active the entire year before the latest expedition.  Another hydrophone and other instruments will monitor the volcano in the coming year.