Scientists debate if, when and how to relocate plants, animals and insects whose habitats have been damaged by climate change 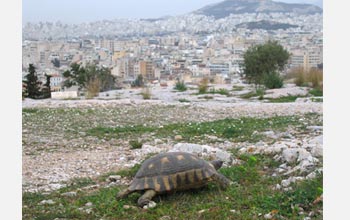 A tortoise on the edge of Athens, Greece.

Scientists are, for the first time, objectively evaluating ways to help species adapt to rapid climate change and other environmental threats via strategies that were considered too radical for serious consideration as recently as five or 10 years ago. Among these radical strategies currently being considered is so-called "managed relocation." Managed relocation, which is also known as "assisted migration," involves manually moving species into more accommodating habitats where they are not currently found.

A new, ground-breaking tool to help decision-makers determine if, when and how to use managed relocation is described in the May 25, 2009 issue of the Proceedings of the National Academy of Sciences (PNAS) by a multi-disciplinary working group.

Partially funded by the National Science Foundation (NSF), the working group is co-led by Jessica Hellmann and Jason McLachlan of the University of Notre Dame, Dov Sax of Brown University, and Mark Schwartz of the University of California at Davis. David Richardson of Stellenbosch University in South Africa led the writing of the paper.

The researchers' tool is ground-breaking because managed relocation has been categorically eschewed by some scientists for fear that relocated species would overpopulate their new habitats, cause extinctions of local species, or clog water pipes as invasive zebra muscles have done in the Great Lakes. Nevertheless, some conservationists and groups have already used managed relocation or are currently considering doing so.

Do Something or Do Nothing?

So why is managed relocation, a once-taboo and potentially harmful strategy, now being seriously considered? "Because," says Hellmann, "it is becomingly overwhelmingly evident that climate change is a reality; and it is fast and large. Consequences will arise within decades, not centuries." So action seems much more important now than it did even five or 10 years ago when atmospheric concentrations of greenhouse gases were lower. Now, we are committed to greater degrees of climate change."

What's more, a "do nothing" response to climate change involves significant risks. Hellman says, "We have previously been able to say, 'let nature run its course.' But because humans have already changed the world, there is no letting nature run its course anymore. Now, action, like inaction, has potential negative consequences." So, adds Richardson, "we must develop new tools and new ways to balance the risks of inaction vs. action."

Managed relocation is not the only controversial adaptation strategy currently being considered by scientists. Other such strategies include fertilizing the oceans to increase their absorption of greenhouse gases and thereby reduce climate change, conserving huge migratory corridors that may extend thousands of kilometers, and preserving the genetic diversity of threatened species in seed banks.

Many species have survived previous, slower periods of climate change by evolving or by moving to more hospitable habitats via their own power. But such survival strategies are now often precluded by: 1) the presence of cities and by other unnatural obstacles that prevent organisms from reaching new destinations; and 2) the speed of climate change, which may raise the Earth's average temperature by as much as 6 degrees Celsius in the next 100 years--a large, rapid change by nature's standards.

As temperatures increase, significant percentages of the Earth's species may become trapped--like fish out of water--in habitats that have become too hot, too dry, or too something else for them. They may therefore go extinct or lose genetically important segments of their populations. Such losses may disrupt large ecosystems and damage agricultural, cultural and economic systems.

The working group's consideration of managed relocation has not ended the controversies surrounding this strategy's use, which sometimes still even pit members of the working group against one another. Why is managed relocation so controversial?  Because it begs the question:  Do we really know enough to predict how organisms will behave in new locations and whether they will harm receiving habitats?

"The results of intentional and accidental introductions of species into new habitats have taught us a great deal about the implications of moving organisms to new habitats," says Richardson. Nevertheless, predictions of whether introduced species will ‘take' in new areas and their likely impacts will always involve uncertainty.  But we can make informed predictions with stated bounds of uncertainty."

To this end, the researchers' tool is designed to help expose managed relocation's risks, trade-offs and costs--considerations that are often absent from decision-making on natural resources.  Specifically, it provides stakeholders with a system for individually scoring a proposed relocation based on multi-disciplinary criteria. These multi-disciplinary criteria include the probability of the success of a proposed relocation, its potential for harming receiving ecosystems, its costs, its potential for triggering violations of the Endangered Species Act, and the social and cultural importance of impacted species.

Comparisons of stakeholders' scores should help stakeholders identify the sources of their disagreements so that they may be resolved.  However, the tool does not, by itself produce management recommendations.

"The tool takes advantage of the fact that, although science can't tell us exactly what will happen in the future, it can tell us how likely a favorable result is--useful information for decision-makers," says NSF Program Director Nancy Huntly.

Not Just Applicable to Endangered Species

In addition to addressing managed relocations of endangered species, the researchers' tool may also address: