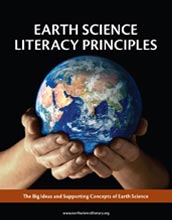 NSF and other organizations have released a report on earth science literacy importance.

Earth's rocks and other materials provide a record of its history. Our solar system formed from a vast cloud of gas and dust 4.6 billion years ago. Earth's crust has two distinct types: continental and oceanic.

Even modest changes to Earth's systems have had profound influences on human societies and the course of civilization, according to the report. Understanding these systems and how they interact is vital for our survival, the report states.

"The Earth sciences have never been more important than they are today," says Robert Detrick, director of NSF's Division of Earth Sciences. "It's important that every citizen have knowledge of the fundamental concepts of Earth science such that he or she may make informed and responsible decisions about public issues--from climate change to energy, from natural resources to earthquake hazards.

"The Earth Science Literacy Initiative is a very important effort to convey this information about Earth science to the general public."

Earth science literacy is especially important at this time in history, echoes the report: "There are many challenges facing humanity--dwindling energy and mineral resources, changing climate, water shortages--directly relating to the Earth sciences. There are many difficult decisions that governments, local and national, will have to make concerning these issues. How well humans survive the twenty-first century will depend on the success of these decisions."

Earth Science Literacy Principles provides a summary of the major ideas in earth science for policy makers, educators, students and the general public.

The report complements the efforts of ocean, climate and atmospheric scientists, educators and others to define the ideas and concepts essential for a geoscience-literate public.

The workshops brought together scientists from across the earth sciences, including mineralogists, petrologists, sedimentologists, paleontologists, geophysicists, geomorphologists, biogeochemists, volcanologists, geohazards specialists and hydrologists, among others.

The document has undergone review by leading scientists on each of the topics.  Major geoscience and earth science education professional organizations have endorsed the report.

"Because of its validity, authority and succinct format, Earth Science Literacy Principles will be influential in a wide variety of scientific, educational and political domains," says Michael Wysession, chair of ESLI and a geoscientist at Washington University in St. Louis. "New textbooks and curricula are already being developed using the report."

As principle 9.9, the final one of the report, states, "An Earth-science-literate public, informed by a current and accurate understanding of the Earth, is critical to the promotion of good stewardship, sound policy and international cooperation."

For humans--and the planet on which they live--earth science literacy is a prerequisite to a successful future.