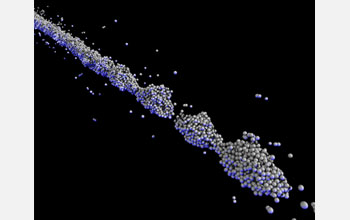 University of Chicago researchers recently showed that dry granular materials such as sands, seeds and grains have properties similar to liquid, forming water-like droplets when poured from a given source. The finding could be important to a wide range of industries that use "fluidized" dry particles for oil refining, plastics manufacturing and pharmaceutical production.

The science journal Nature reports the finding in its June 25 issue. The materials research center at the University of Chicago is supported by the National Science Foundation.

Until recently, studies of so-called "free falling granular streams" tracked shape changes in flows of dry materials, but were unable to observe the full evolution of the forming droplets or the clustering mechanisms involved.

But in this new experiment, researchers measured nanoscale forces that cause droplet formation using a special co-moving apparatus devised for a high-speed, $80,000 camera that captures images much like a skydiver might photograph a fellow jumper in free fall.

They observed falling 100-micrometer-diameter glass beads, or streaming sand, and found that forces as much as 100,000 times smaller than those that produce surface tension in ordinary liquids could cause droplet formation in granular streams and cause these dry streams to behave like an ultra-low-surface-tension liquid.

John Royer, the graduate student in physics at the University of Chicago, who developed the apparatus, and his colleagues also directly measured grain-to-grain interactions with an atomic force microscope.

"At first we thought grain-grain interactions would be far too weak to influence the granular stream," said Royer. "The atomic force microscopy surprised us by demonstrating that small changes in these interactions could have a large impact on the break up of the stream, conclusively showing that these interactions were actually controlling the droplet formation."

Researchers say understanding how dry materials coalesce could create greater efficiencies in their transportation and manipulation. The pharmaceutical production of pills, for example, could benefit by pouring equal amounts of a drug into a capsule every time while greatly reducing waste.

"Estimates show that we waste 60 percent of the capacity of many of our industrial plants due to problems related to the transport of these materials," said Jaeger. "Hence even a small improvement in our understanding of how granular media behave should have a profound impact for industry."

The researchers write in their report that these "experimental results open up new territory for which there currently is no theoretical framework."

"Our experiments ask two questions for which currently there is no established answer," said Jaeger. "Both questions are about how a liquid breaks apart. How does the break-up proceed in the ultra-low surface-tension limit and what happens in the ultra-low temperature limit when particles cease to move relative to each other?

"It is quite remarkable that a granular stream consisting of macroscopic particles provides a model system to explore it."