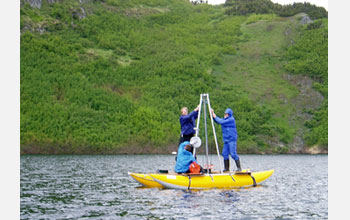 Researchers take a sediment core from a lake in Alaska.

A new study indicates that Arctic temperatures suddenly increased during the last 50 years of the period from A.D. 1 to the year 2000. Because this warming occurred abruptly during the 20th century while atmospheric greenhouse gases were accumulating, these findings provide additional evidence that humans are influencing climate.

Incorporating geologic records, biologic records and computer simulations, the study reconstructed Arctic summer temperatures at a resolution down to decades, and thereby extends the climate record a full 1,600 years beyond the 400 year-long record that was previously available at that resolution. This newly lengthened record shows that recent warming was preceded by a cooling trend that lasted at least 1,900 years and should have continued throughout the 20th century. These results indicate that recent warming is more anomalous than previously documented, says Darrell Kaufman of Northern Arizona University--the lead author of the study.

Conducted by an international team of scientists and primarily funded by the National Science Foundation (NSF), the study is described in the September 4, 2009, issue of Science.

Kaufman says that the results of his team's study are significant not only because of their implications for our understanding of human influences on climate change, but also because they agree with the National Center for Atmospheric Research's (NCAR) climate model, which is used for predicting future climate change; this agreement increases confidence in the model's simulations of future climate change.

Specifically, the Kaufman et al. study is the first to quantify at a decadal resolution a pervasive cooling across the Arctic from the early part of the first millennium AD to the industrial revolution, according to Kaufman. During this period, summer temperatures in the Arctic cooled at a rate of about 0.2 degrees Celsius per millennium, leading to the 'Little Ice Age', a period of sustained cold that ended around 1850.

"Scientists have known for a while that the current period of warming was preceded by a long-term cooling trend," says Kaufman. "But our reconstruction quantifies the cooling with greater certainty than before."

The researchers believe that the long cooling trend was caused by a previously recognized wobble in the Earth's axis of rotation that slowly increased the distance between the Earth and the Sun during the Arctic summer, and thereby reduced summer sunshine in the Arctic. (See figure.) But even though this cooling wobble persisted throughout the 20th century, by the middle of the 20th century, summer temperatures in the Arctic were about 0.7 degrees Celsius higher than would have been expected if the cooling trend had continued. This incongruity provides evidence of human influences on climate change, says Kaufman.

What's more, the results of the Kaufman et al. study together with recent records of thermometer readings indicate that the last decade was the warmest of the last two millennia--with Arctic temperatures averaging about 1.4 degrees Celsius higher than would have been expected if the cooling trend had continued, according to Kaufman.

Kaufman says that his team's study agrees with previous studies that have shown that Arctic temperatures increased during the 20th century almost three times faster than temperatures increased throughout the rest of the Northern Hemisphere. Called arctic amplification, this phenomenon is caused by increases in the Arctic's absorption of the sun's heat by dark land and exposed ocean as Arctic ice and snow melt away. "The ability of such a slight wobble in the Earth's axis to cause a significant temperature change over the 1,900 year period preceding the onset of recent warming provides further evidence of the sensitivity of the Arctic's climate system," says Kaufman.

"Because we know that the processes responsible for past arctic amplification are still operating, we can anticipate that it will continue into the next century," says Gifford Miller of the University of Colorado, Boulder, a member of the study team. "Consequently, Arctic warming will continue to exceed temperature increases in the rest of the Northern Hemisphere, resulting in accelerated loss of land ice and an increased rate of sea-level rise, with global consequences."

The 2000-year reconstruction of Arctic temperatures provided by the Kaufman et al. study incorporated three types of field-based data--each of which captured the response of a different component of the Arctic's climate system to changes in temperature.

These field-based data included temperature reconstructions that were published by the Kaufman et al. team earlier this year. These reconstructions were based on evidence provided by sediments from Arctic lakes, including algal abundance, which reflects the length of the growing season, and the thickness of annually deposited sediment layers, which increases during warmer summers when deposits from glacial melt-water increase. The Kaufman et al. study also incorporated previously published data from glacial ice and tree rings that was calibrated against the instrumental temperature record.

The Kaufman et al. study also included a 2,000 year-long computer simulation of climate change that incorporated the Earth's slow rotational wobble and resulting reduction in seasonal sunlight in the Arctic. Because the model's estimate of the amount of cooling resulting from the wobble effect matched the cooling reflected in the long record of climate change provided by lake sediments and other natural archives, this analysis increased confidence in the model's ability to accurately predict temperature responses in the Arctic to factors that influence climate change.  "This result is particularly important because the Arctic is perhaps the most sensitive area of the Earth to the human factors that influence climate change," says David Schneider of NCAR, who is a member of the research team.

"As we are confronted with evidence of global warming, it is extremely helpful to be able to use paleoclimate data to provide context for today's climate relative to the range and trajectory of recent climate regimes," says Neil Swanberg, director of NSF's Arctic System Science Program. "This reconstruction uses a variety of data sources to extend high resolution records back in time sufficiently long to compare reconstructed temperatures to those from models that include changes in insolation due to changes in the Earth's orbital patterns. That the results appear to match so well increases our confidence in our understanding of the processes that are impacting the global Earth system."