In recognition of World Refugee Day, 12 hours of live webcasts and chats will bring the world in touch with refugee camps around the world 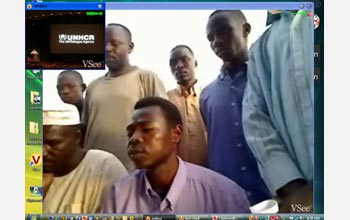 A screen capture from an earlier VSee session from the newly named Obama school in Chad.

Refugees in global conflict zones often seem viscerally close in spirit, but tangibly remote. Now, for one day, the world will connect directly to refugees from Darfur, central Columbia and other sites in a 12-hour, live webcast.

Sponsored by the United Nations High Commissioner for Refugees (UNHCR) and delivered via the VSee communications platform--developed with the support of the U.S. National Science Foundation (NSF)--the event will bring world leaders, activists, media icons and legions of people from around the world into a day-long conversation with refugees and United Nations (UN) staffers.

From RefugeeDayLive.org, the webcast will link the world with the Djabal Camp in Eastern Chad and the Villavicencio, La Nora barrio, IDP settlement in central Columbia.

At the Web site, anyone can send texts, videos and other messages to refugees over the next several days and during the webcast on Saturday, June 20, 2009, starting at 9:00 a.m. EST. Throughout the webcast, visitors will interact with refugees and UN staff on-site and share their experiences.

Highlights include guided tours of the camps, a mother showing how she cooks refugee rations for her family, local dances and songs, and conversations with community elders about daily struggles.

"Traditional videoconferencing technology often breaks down due to the assumption of good infrastructure," says engineer Milton Chen, CEO of VSee and one of the developers of the technology. "Although we originally developed VSee for large enterprise global deployments to fit Intranet bandwidth limitations, the same approach turned out to enable communication with difficult-to-reach locations like refugee camps."

Though originally created as a telework platform, VSee adapted their system for security, and because the system shrank the cameras' data-streaming bandwidth to a fraction of its original size, even police cruisers were able to access the feeds via cellular networks.

The same capabilities enable VSee to link people from very limited bandwidth locations with anyone else in the world.

On June 20, VSee will connect with an Internet broadcast system, enabling a VSee videoconferencing session to be webcast to hundreds of thousands of people watching live. The audience will be able to ask questions of refugees using such tools as text chat and Twitter.

Developed with NSF support as part of the Small Business Innovation Research Program, VSee originally emerged as Chen's doctorate work at Stanford University, where he focused on videoconferencing and remote collaboration.

Dissatisfied with existing virtual office platforms, Chen hoped to maintain the advantages of telework while shedding its technical shortfalls and impact on office social dynamics.

The current application is the latest for a technology that has evolved far beyond its initial development.  For more on the system, including video interviews with Chen and NSF program officer Errol Arkilic, see Keeping an Eye on the Inauguration at: http://www.nsf.gov/news/news_summ.jsp?cntn_id=114128.