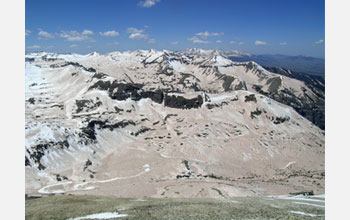 Accelerated snowmelt--precipitated by desert dust blowing into the mountains--changes how alpine plants respond to seasonal climate cues that regulate their life cycles, according to results of a new study reported this week in the journal Proceedings of the National Academy of Sciences (PNAS). These results indicate that global warming may have a greater influence on plants' annual growth cycles than previously thought.

Current mountain dust levels are five times greater than they were before the mid-19th century, due in large part to increased human activity in deserts.

"Human use of desert landscapes is linked to the life cycles of mountain plants, and changes the environmental cues that determine when alpine meadows will be in bloom, possibly increasing plants' sensitivity to global warming," said Jay Fein, program director in the National Science Foundation (NSF)'s Division of Atmospheric Sciences, which funded the research in part.

This year, 12 dust storms have painted the mountain snowpack red and advanced the retreat of snow cover, likely by more than a month across Colorado.

"Desert dust is synchronizing plant growth and flowering across the alpine zone," said Heidi Steltzer, a Colorado State University scientist who led the study. "Synchronized growth was unexpected, and may have adverse effects on plants, water quality and wildlife."

"It's striking how different the landscape looks as result of this desert-and-mountain interaction," said Chris Landry, director of the Center for Snow and Avalanche Studies (CSAS) in Silverton, Colo., who, along with Tom Painter, director of the Snow Optics Laboratory at the University of Utah, contributed to the study.

"Visitors to the mountains arriving in late June will see little remaining snow," said Landry, "even though snow cover was extensive and deep in April. The snow that remains will be barely distinguishable from the surrounding soils.

Earlier snowmelt by desert dust, said Painter, "depletes the natural water reservoirs of mountain snowpacks and in turn affects the delivery of water to urban and agricultural areas."

With climate change, warming and drying of the desert southwest are likely to result in even greater dust accumulation in the mountains.

In an alpine basin in the San Juan Mountains, the researchers simulated dust effects on snowmelt in experimental plots. They measured dust's acceleration of snowmelt on the life cycles of alpine plants.

The timing of snowmelt signals to mountain plants that it's time to start growing and flowering. When dust causes early snowmelt, plant growth does not necessarily begin soon after the snow is gone.

Instead, plants delay their life cycle until air temperatures have warmed consistently above freezing.

"Climate warming could therefore have a great effect on the timing of growth and flowering," said Steltzer.

Similarity in flowering times and plant growth will result in abundant resources for wildlife for a short time rather than staggered resources over the whole summer, Steltzer believes.

"With increasing dust deposition from drying and warming in the deserts," she said, "the composition of alpine meadows could change as some species increase in abundance, while others are lost, possibly forever."