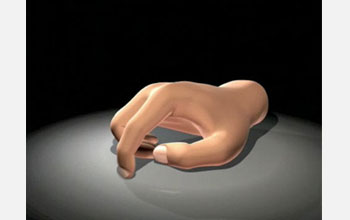 A new study suggests activities combining movement and force tax our brains to capacity, countering a long-held belief that difficulty with dexterous tasks results from the limits of the muscles themselves. The findings may help explain why minor damage to the neuromuscular system can at times profoundly affect one's ability to complete everyday tasks.

The research, supported in part by the National Science Foundation and the National Institutes of Health, appears in the July 8, 2009, Journal of Neuroscience.

"Our results show how much the mechanics of the body, and a given task, affect what the brain can or can't do," said biomedical engineer Francisco Valero-Cuevas of the Brain-Body Dynamics Lab at the University of Southern California, who led the research. "The so-called 'problem' of muscle redundancy--having too many muscles and joints to control--may not be the only challenge the brain faces when controlling our bodies. Rather, we seem to have about as many muscles as we need, and not too many, as others have proposed in the past."

"The scientific world and the clinical world have long been arriving at conflicting conclusions, and this work begins to resolve the paradox," added Valero-Cuevas. "While neuroscience and biomechanics studies have suggested that muscles and joints are, in theory, redundant and provide numerous alternative solutions to simple tasks, clinicians routinely see people seeking treatment for hand disability resulting from relatively minor conditions such as aging."

This research follows earlier experiments that suggested our brain and complex musculature can barely keep up with requirements posed by our anatomy and the mechanics of even ordinary, real-world, finger tasks like rubbing a surface. The conclusions begin to explain why even minor damage to the neuromuscular system seems to produce real deficits in manipulation.

The research focused on simultaneous force and motion--specifically from fingers either pushing or rubbing a surface--with volunteers conducting the experiment at defined, yet varying, speeds.

Knowing the force-producing properties of muscle, the researchers expected the rubbing motion would show reduced downward force as the speed of motion increased. Surprisingly, whether rubbing slowly or at a pace 36-times faster, speed had little affect on the downward force the volunteers could produce.

Valero-Cuevas and his collaborators--his former students Kevin G. Keenan of the University of Wisconsin/Milwaukee, Veronica J. Santos of Arizona State University, and Madhusudhan Venkadesan of Harvard University--interpret the results to mean the brain is sufficiently occupied by the physical demands of combining motions and forces, so the muscle properties are not the limiting factors for how much force the fingers can create.

"This begins to explain the clinical reality that when something in the system is damaged, either in the brain or body, we can see losses of function," said Valero-Cuevas. "We are not as 'redundant' as we thought."

The study is part of an ongoing NSF Emerging Frontiers in Research and Innovation study to understand how to achieve dexterous, near-optimal control of a hand by having humans and computers perform familiar, challenging tasks. In that effort, researchers will use the same algorithms both to model human motor control and to go beyond the present state-of-the-art in robotic manipulation.

The research team is conducting additional research to determine what exact neural and anatomical mechanisms are producing these results.

Read more in the USC press release at: http://viterbi.usc.edu/news/news/2009/one-finger-exercise.htm