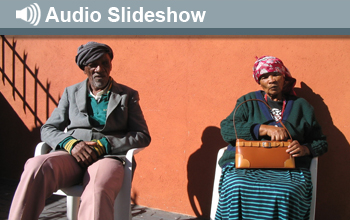 A new way to classify sounds in some human languages may solve a problem that has plagued linguists for nearly 100 years--how to accurately describe click sounds distinct to certain African languages.

She explains her findings in the online version of the Journal of the International Phonetic Association posted on July 10. The National Science Foundation supports the research.

The African languages studied by Miller use a series of consonants called "clicks" which are unlike most consonants in that they are produced with air going into the mouth rather than out. The N|uu clicks, produced using both the front and back of the tongue, are difficult to characterize.

"When we say 'k' or 't,' the sound is produced by air breathing out of our lungs," said Miller. "But click sounds are produced by breathing in and creating suction within a cavity formed between the front and back parts of the tongue. While linguists knew this, most didn't want to accept it was something people controlled." So they loosely classified these click consonants using imprecise groupings.

"For nearly a century, some of these sounds fell into an imprecise catch-all category that included every type of modification ever reported in a click language," said Miller.  "The movements of the tongue at the front of the mouth were quite accurately classified. But tongue movements at the back part of the mouth were not classified properly."

The reason was that prior tools were either too large to carry to fieldwork situations in Southern Africa, or too unsafe. Ultrasound imaging changed that by allowing Miller's research team to use safer, faster, non-invasive technology in the field to view the back part of the tongue.

"We wanted to classify clicks in the same way we classify other consonants," said Miller, who was a visiting faculty member at the University of British Columbia during the 2008-2009 academic year. "We think we've been pretty successful in doing that."

N|uu is severely endangered with fewer than 10 remaining speakers, all of whom are more than 60 years of age. Linguists are working diligently to document the unique aspects of this language before it disappears.