When Robots Invaded the Senate 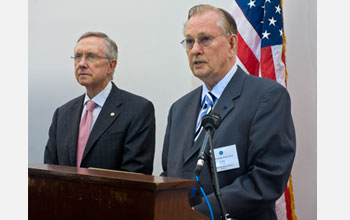 View a video from the CPS luncheon briefing and open house on Capitol Hill.

Scalpels that a surgeon uses to excise small tumors but never actually touches. Robots that can take the place of lab rats in clinical trials. Cars that can drive themselves through busy streets. These were just some of the cutting-edge technologies on display at the Hart Senate Office Building last week as the National Science Foundation (NSF) presented a luncheon briefing and open house for Senate members and their staff on cyber-physical systems (CPS), an emerging technological field that incorporates computing power to improve virtually every facet of modern life.

The event brought together more than 50 researchers and students who are conducting CPS research across the country, giving them the opportunity to inform policymakers on Capitol Hill about how that research may impact many of the challenges the federal government is grappling with, including making health care more efficient and effective, revitalizing the auto industry and revamping the U.S. economy.

The basic concept behind CPS is straightforward--combine computing power with existing systems to turn them into "smart" technologies such as airplanes that can detect each other and automatically adjust their flight paths accordingly, or bridges that can sense when they are being overloaded and are in danger of falling down. Experts believe that CPS technologies will increasingly affect our wellbeing, security, and competitiveness, in a variety of areas including aerospace, automobiles, civil infrastructure, energy, finance, healthcare and manufacturing.

"What you do here has tremendous impact," Senate Majority Leader Harry Reid said to the assembled researchers during brief remarks at the event. "You're changing the world before our eyes." Reid, a self-described technology enthusiast, was able to try out some of the devices himself, including trying his hand at guiding a robot developed by researchers at Johns Hopkins University that allows surgeons to make precise movements while ‘feeling' the variety of surfaces the robot's hand comes in contact with.

NSF Director Arden L. Bement, Jr. added that CPS technologies are a good example of the real world applications that come out of basic academic research. "The smart technologies on display here come from scientists and engineers who like Senator Reid are pleased to accept the huge challenge of working hard and working smarter," Bement concluded.

After a brief introduction from Jeannette Wing, NSF's assistant director for computer & information Science & engineering, the open house shifted into a luncheon briefing with presentations by Don C. Winter, vice president of engineering and information technology at Boeing's Phantom Works, and Julian M. Goldman, a physician at Massachusetts General Hospital in Boston and the medical director of Partners HealthCare System Biomedical Engineering.

Winter spoke about the importance of CPS in the aerospace industry and beyond. "CPS is becoming increasingly prevalent beyond aerospace," he concluded, and added that this growth will add jobs and value to our overall economy.

Goldman showed the audience several cases of common medical errors that caused severe complications for patients and sometimes even their deaths. Goldman then explained how integrating CPS technologies into more areas of healthcare can not only reduce mistakes, but also improve the quality of care patients receive. "It's not about technology," he stated, "it's about patient safety and hope."

Lunch for the event was provided by the Coalition for National Science Funding, the Computing Research Association, the American Chemical Society's Science & the Congress Project, and the Association for Computing Machinery.

At the end of the event, the robots, devices and other technologies were packed away by their creators, but participants in the event agreed they had left behind a better understanding of the new possibilities and technologies that stand to improve virtually every facet of our lives.