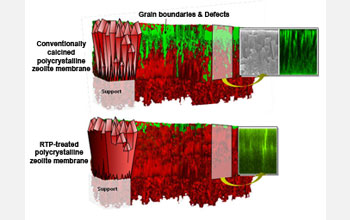 Zeolite membranes show defects after slow heating (top) but not after a new rapid heating process.

Engineers have developed a new method for creating high-performance membranes from crystal sieves called zeolites; the method could increase the energy efficiency of chemical separations up to 50 times over conventional methods and enable higher production rates.

The ability to separate and purify specific molecules in a chemical mixture is essential to chemical manufacturing. Many industrial separations rely on distillation, a process that is easy to design and implement but consumes a lot of energy.

Researchers led by chemical engineer Michael Tsapatsis of the University of Minnesota reported this discovery in the July 31, 2009, issue of Science.

Tsapatsis's team developed a rapid heating treatment to remove structural defects in zeolite membranes that limit their performance, a problem that has plagued the technology for decades.

"Using membranes rather than energy-intensive processes such as distillation and crystallization could have a major impact on industry," said NSF program officer Rosemarie Wesson. This discovery could increase the energy efficiency of producing important chemical solvents such as xylene and renewable biofuels such as ethanol and butanol.

Researchers create zeolite membranes by growing a film of crystals with small organic ions added to direct the crystal structure and pore size--two zeolite properties that help determine which molecules can pass through the material. Then they slowly heat the zeolite film in a process called calcination to decompose the ions and open the pores.

However, Tsapatsis explained, "This method for creating zeolite films often leaves cracks at the boundaries between grains of zeolite crystals." These defects have prevented zeolite films from being used effectively as membranes, because molecules of unwelcome chemicals that are rejected by the zeolite pores can still penetrate through the membrane defects.

"While it may be possible to correct some of these defects, the repair process is difficult and expensive," Wesson said. Currently zeolite membranes have found use only in specialized, smaller-scale applications, such as the removal of water from alcohols or other solvents.

In an effort to minimize the formation of cracks and other defects, the heating rate during calcination is very gentle, and the process can take as long as 40 hours--typically a material is heated at a rate of 1 degree Celsius per minute up to a temperature between 400 and 500 degrees Celsius, where it is held steadily for several hours before being allowed to slowly cool. Because conventional calcination is time-consuming and energy-intensive, it has been difficult and expensive to produce zeolite membranes on a large scale.

Tsapatsis's team developed a treatment called Rapid Thermal Processing (RTP), a treatment in which zeolite film is heated to 700 degrees Celsius within one minute and kept at that temperature for no more than two minutes.  Acting as an annealing method, RTP refines the granular structure of the zeolite crystal film.

When the researchers examined the RTP-treated films, they found no evidence of cracks at grain boundaries. Although they found other types of defects, these don't seem to affect the membrane properties or performance.

The researchers demonstrated the RTP process on relatively thick (several micrometers) zeolite membranes.  Tsapatsis and collaborators are now working towards making zeolite membranes 10 to 100 times thinner to allow molecules to pass through more quickly. They hope to eventually implement RTP treatment with its beneficial effects to these membranes as well.