Of Mutts and Men 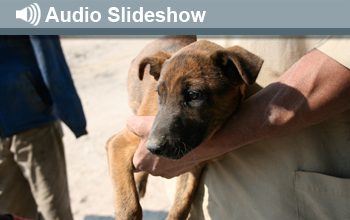 Domesticated animals provide man with benefits such as food, clothing and muscle power. Dogs, which descend from gray wolves that originated in Eurasia, were the first animals domesticated by man. Since that time, man has imposed a strong artificial selection pressure for desirable traits, resulting in the various dog breeds we have today.

A recent study published in the August 3 issue of Proceedings of the National Academy of Sciences provides insight into the origin of some popular breed dogs and how domestication has affected the overall level of diversity in dogs. Adam Boyko in the Department of Biological Statistics and Computational Biology at Cornell University is the lead author of the study.

Boyko is optimistic that this NSF-supported study will help refine the statistical models scientists currently used to understand evolution and genetic diversity. He stated, "How the domestication process affects genetic diversity is poorly understood. We were interested in studying village dogs because we expected them to be the modern day dogs most similar to dogs that existed before man began to create breeds. Our study is unique because we are able to surmise whether specific village dog populations are more genetically similar to breed dogs or indigenous ancestral dogs."

Mobility is another factor that affects genetic diversity of dogs. Because ancient dog populations have a location-specific genetic "signature," researchers can learn about migration patterns and population history by comparing the markers found in breed dogs to those observed in the semi-feral village dog populations of geographically isolated areas.

Boyko and his team, which includes his brother, sister-in-law, and a number of African research partners, sampled 318 village dogs from seven distinct regions of Africa. They compared the genetic signature of village dogs to Pharaoh hounds, Rhodesian ridgebacks and other breed dogs thought to be native to Africa, in addition to Puerto Rican street dogs and mixed breed dogs from the U.S.

They found that most African village dogs are genetically distinct from non-native breed dogs, but share some markers with mixed breed dogs from North America. These results indicate that African village dogs descend from indigenous ancestors related to Basenjis, while Pharaoh hounds and Rhodesian ridgebacks, previously believed to be African in origin, are more closely related to mixed-breed American dogs.

"For the most part, African dogs are distinct from other dogs we have studied, and these village dog populations display more diversity than purebred dogs across the markers we tested," explains Boyko. "We found exceptions in Namibia and Giza, which may be due to European colonization or proximity to Eurasia, the ancestral home of modern breed dogs."

The unique relationship between humans and dogs provides the opportunity to infer details about the ancient people that also inhabited the places in which these dogs lived. Using genetics to trace the movements of dog populations across continents will likely yield insights into the migrations of man during these periods. Therefore, the genetic history of man's best friend may also speak to the history and habits of man.