Process may be linked with presence of water 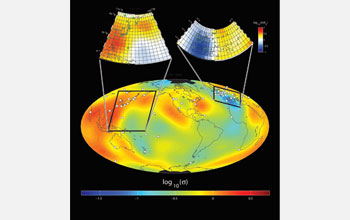 Scientists have mapped Earth's electrical conductivity on a global-scale in 3-D for the first time.

As tags on household appliances warn, water conducts electricity extremely well. Now, scientists have found that enhanced electrical conductivity in parts of Earth's mantle may signal the presence of water far below our planet's surface.

The researchers created the first global three-dimensional map of electrical conductivity in the mantle. Results of their study are published this week in the journal Nature.

The areas of high conductivity coincide with subduction zones--places where tectonic plates are being subducted beneath the Earth's crust, say the Oregon State University (OSU) scientists who performed the research. They used electromagnetic induction sounding of the Earth's mantle in the study. The method is very sensitive to interconnecting pockets of fluid in rocks and minerals.

"This work is important because it complements global 3-D seismic imaging of Earth's interior, which uses sound waves generated by earthquakes," said Robin Reichlin, program director in the National Science Foundation (NSF)'s Division of Earth Sciences, which funded the research. "Scientists may be able to combine these two methods to tease out a more detailed understanding of variations in Earth's inner composition, water content and temperature."

Subducting plates are comparatively colder than surrounding mantle materials and should be less conductive, geologists have believed. However, the OSU scientists suggest, conductivity in these areas may be enhanced by water drawn downward during the subduction process.

"Many earth scientists thought that tectonic plates are not likely to carry much, if any, water deep into the Earth's mantle," said Adam Schultz, a geologist at OSU and a co-author of the Nature paper. "Our model, however, clearly shows a close association between subduction zones and high conductivity. The simplest explanation is water."

The study provides new insights into the fundamental ways in which our planet works, Schultz says. Despite advances in technology, scientists are still unsure how much water lies beneath the ocean floor--and how much of it makes its way into the mantle.

The implications are myriad. Water interacts with minerals differently at different depths, and small amounts of water may change the physical properties of rocks, alter the viscosity of materials in the mantle, assist in the formation of rising plumes of melted rock, and ultimately affect what flows out on the surface.

"In fact, we don't really know how much water there is on Earth," said Gary Egbert, an oceanographer at OSU and co-author of the paper. "There is some evidence that there is many times more water below the ocean floor than there is in all the oceans of the world combined. Our results may shed some light on this question."

There may be different explanations for how the water--if indeed the conductivity is reflecting water--got there.

"If it isn't being subducted down with the plates," Schultz said, "is it primordial, down there for four billion years? Or did it come down as the plates slowly subduct, suggesting that the planet may have been much wetter a long time ago? These are fascinating questions for which we don't yet have answers."

Anna Kelbert, a post-doctoral researcher at OSU and lead author of the paper, says that the next step is to replicate the experiment with newly available data from both ground observatories and satellites, then conduct further research to better understand the water cycle and how its interaction with deep-Earth minerals works.

Ultimately, the scientists hope to produce a model quantifying how much water may be in the mantle, locked up in its rocks.

Their work is also supported by NASA.