Lightning's Mirror Image ... Only Much Bigger 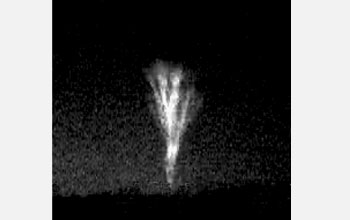 Trees form a horizon from which a gigantic jet emerges; the thunderstorm is 200 miles away.

With a very lucky shot, scientists have captured a one-second image and the electrical fingerprint of huge lightning that flowed 40 miles upward from the top of a storm.

These rarely seen, highly charged meteorological events are known as gigantic jets, and they flash up to the lower levels of space, or ionosphere.

While they don't occur every time there is lightning, they are substantially larger than their downward striking cousins.

"Despite poor viewing conditions as a result of a full moon and a hazy atmosphere, we were able to clearly capture the gigantic jet," said study leader Steven Cummer, an electrical and computer engineer at Duke University in North Carolina.

Images of gigantic jets have only been recorded on five occasions since 2001. The Duke University team caught a one-second view and magnetic field measurements that are now giving scientists a much clearer understanding of these rare events.

"This confirmation of visible electric discharges extending from the top of a storm to the edge of the ionosphere provides an important new window on processes in Earth's global electrical circuit," said Brad Smull, program director in NSF's Division of Atmospheric Sciences, which funded the research.

"Our measurements show that gigantic jets are capable of transferring a substantial electrical charge to the lower ionosphere," Cummer said.

"They are essentially upward lightning from thunderclouds that deliver charge just like conventional cloud-to-ground lightning. What struck us was the size of this event."

It appears from the measurements that the amount of electricity discharged by conventional lightning and gigantic jets is comparable, Cummer said.

But the gigantic jets travel farther and faster than conventional lightning because thinner air between the clouds and ionosphere provides less resistance.

Whereas a conventional lightning bolt follows a six-inch channel and travels about 4.5 miles down to earth, the gigantic jet recorded by the scientists contained multiple channels and traveled about 40 miles upward.

"Given that reservoirs of electric charge in thunderstorms are the sources for both lightning and gigantic jets, and that both events involve contact between these reservoirs and a very large conducting surface, it is not surprising that their charge transfers are comparable," Cummer said.

Scientists don't know what conditions or what types of storms are conducive to gigantic jet formation.

It has been difficult in the past to obtain images of gigantic jets because they occur so quickly that cameras have to be trained on them at the precise moment they occur.

The equipment had been set to capture another phenomenon known as sprites, which were first photographed in 1989.

Sprites are electrical discharges that occur above storm clouds and are colored red or blue, with jellyfish-like tendrils hanging down.

Cummer maintains a low-light video camera trained to the sky and programmed to start recording when specific meteorological conditions occur.

At the same time, other equipment constantly measures radio emissions in the same sector to capture electrical events. A special GPS system ensures that the readings from all the equipment are synchronized.

Cummer is planning to install a low-light, high-speed camera to capture gigantic jet images in color, which could provide additional information about chemical processes and temperatures inside the phenomenon.