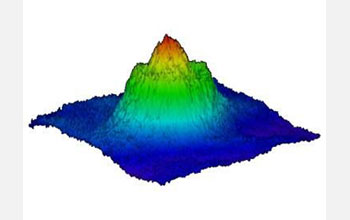 The Mott insulating state is similar to the structure of a many-layered wedding cake.

Transitions are exciting. And at temperatures close to absolute zero, studying the transition from one quantum phase to another tantalizes physicists looking for a deeper understanding of the fundamental laws of the universe.

Now a team of scientists at the University of Chicago has created the first direct images of the transition between phases of ultracold cesium gas, as it changes from normal to superfluid to Mott insulator, making it possible to "see" this phenomenon as it happens.

"These are the first direct images of a complete physical system in situ, allowing us to unambiguously observe certain unique features of the Mott insulating state," explained post-doctoral student Nathan Gemelke.

In a paper appearing in the journal Nature, Gemelke and his co-authors describe the most striking visual feature of this phase transition--a many-layered wedding cake structure.

"The Mott insulator phenomenon was first observed in ultracold atomic gases in 2002 by the group of Ted Hänsch, at the Max-Planck institute for Quantum Optics in Munich, Germany, and has been a subject of intense research ever since," said Cheng Chin, Gemelke's co-author and an assistant professor at the University of Chicago.

A Mott insulator is a special phase of matter, usually formed at very low temperatures, in which certain materials that should conduct electricity act as electrical insulators, due to unusual interactions between electrons. The system studied in Chicago is the ultracold atom equivalent of a Mott insulator.

To make the insulator, the Chicago team trapped individual atoms using a cross-section of laser beams to create an "optical lattice," something like marbles trapped in the individual sections of an egg carton.

"In a Mott insulator, there is exactly one atom at every site, or two, or three, but never a mixture of, say, one here, two there, etc.," Chin explained.

According to Gemelke, the Mott insulator phase sometimes co-exists with superfluid and normal gas phases. Superfluids are another exotic quantum material phase that forms at temperatures near absolute zero.

"In contrast, the Mott insulator phase has a constant density," he said. "Even when it's trapped, if you squeeze it gently, its volume will not change, which means it is incompressible. And if you apply a small force across it, particles do not flow through it, because it acts as an insulator."

The researchers took advantage of the differences between phases to create visual images of the system by measuring the density of the trapped gas.

"In two dimensions, the normal, superfluid and Mott insulating phases can be identified by spatially resolved in-situ imaging," Gemelke said. These two-dimensional images appear as bullseye targets, with denser material showing up as dark rings. The Mott insulator phase image remains a single color all the way through, because its density does not increase.

"In three dimensional systems, the image integrates the density along the line-of-sight, so the measurements represent the combined properties of several phases," Gemelke said.

The result looks like a colorful, multi-layered wedding cake.

"The different layers of the cake are formed by Mott insulating domains of successively higher particle numbers, and their flatness results from their incompressibility," says Gemelke.

"The edges as we go from one layer of the cake to the next are superfluid regions, where the density varies continuously," he said. "As the temperature is increased, the cake melts like a multi-tiered ice cream cake, and smears out the edges of the layers. By measuring its shape, we can infer the temperature-and unlike an ice cream cake, the result is within fifteen parts-per-billion of absolute zero."

The researchers hope to apply the understanding they gain from studying simple quantum gases like this one to the development of a wide range of more subtle and potentially useful new materials, Chin said.

"We are excited to extend this research into basic studies of quantum phase transitions--that is to say, transitions between phases which can occur at zero temperature," he said. "Very fascinating and general phenomena can be observed near these types of transitions, and to have such a simple and readily studied example on the laboratory bench is a great commodity."

"We are surprised by how true the adage is that a picture is worth a thousand words," added Gemlke. "Each image we take of these systems is a high-resolution snapshot into the life of a quantum gas, including all the bumps and wriggles we hope to describe with theory. Every time we think we have extracted all the information we could hope for from an image, we realize there is more to study."