May lead to similar discoveries in feathered dinosaurs 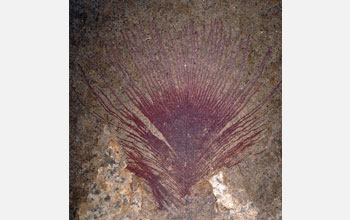 Known for their wide variety of vibrant plumage, birds have evolved various chemical and physical mechanisms to produce these beautiful colors over millions of years.

A team of paleontologists and ornithologists has now discovered evidence of vivid iridescent colors in fossil feathers more than 40 million years old.

The finding, published online August 26 in the journal Biology Letters, signifies the first evidence of a preserved color-producing nanostructure in a fossilized feather.

Iridescence is the quality of changing color depending on the angle of observation, such as the rainbow of colors seen in an oil slick.

The simplest iridescent feather colors are produced by light scattering off the feather's surface and a smooth surface of melanin pigment granules within the feather protein.

Examining feather fossils from the Messel Shale in Germany with an electron microscope, scientists funded by the National Science Foundation (NSF) have documented this smooth layer of melanin structures, called melanosomes.

"Although fossil feathers have been known for many years, determining their original color has not been done," said H. Richard Lane, a paleontologist and program director in NSF's Division of Earth Sciences.

"Discovery of a color-producing nanostructure in a fossil feather opens up the possibility that we may someday be able to determine such colors in fossil birds, as well as in feathered dinosaurs."

For more than 25 years, paleontologists have found microscopic tubular structures on fossilized feathers and hair. These were long interpreted as bacteria that had digested the feathers at the time they were fossilized.

The team had previously discovered that these structures were in fact not bacteria but melanosomes; this information allowed the scientists to document the original color patterns.

"The feathers produced a black background with a metallic greenish, bluish or coppery color at certain angles--much like the colors we see in starlings and grackles today," said Richard Prum, a scientist at Yale and one of the paper's authors.

Following up on the new finding, he and colleagues are racing to discover what additional coloration features may be found in fossil feathers.

"The discovery of ultra-structural detail in feather fossils opens up remarkable possibilities for the investigation of other features in soft-bodied fossils, like fur and even internal organs," said scientist Derek Briggs of Yale, a co-author of the paper.

"The ‘Holy Grail' is reconstructing the colors of feathered dinosaurs," said Yale graduate student and paper lead author Jakob Vinther. "We are working hard to determine if this will be possible."

Other authors of the paper include Julia Clarke (University of Texas at Austin) and Gerald Mayr (Senckenberg Research Institute, Germany). Funding also was provided by the National Geographic Society and Yale University.