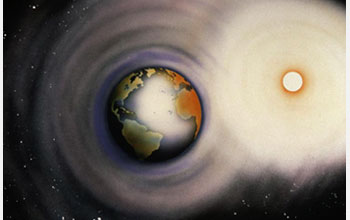 Newly discovered interactions between the Sun and the Earth affect our climate.

Subtle connections among the 11-year-solar cycle, the stratosphere and the tropical Pacific Ocean work in sync to generate periodic weather patterns that affect much of the globe, according to research results appearing this week in the journal Science.

The findings will help scientists get an edge on predicting the intensity of certain climate phenomena, such as the Indian monsoon and tropical Pacific rainfall, years in advance.

"It's been long known that weather patterns are well-correlated to very small variations in total solar energy reaching our planet during 11-year solar cycles," says Jay Fein, program director in the National Science Foundation (NSF)'s Division of Atmospheric Sciences, which funded the research. "What's been an equally long mystery, however, is how they are physically connected. This remarkable study is beginning to unravel that mystery."

An international team of authors led by the National Center for Atmospheric Research (NCAR) in Boulder, Colo., used more than a century of weather observations and three powerful computer models to tackle one of the more difficult questions in meteorology: if the total energy that reaches Earth from the Sun varies by only 0.1 percent across the approximately 11-year solar cycle, how can it drive major changes in weather patterns on Earth?

The answer, according to the study, has to do with the Sun's impact on two seemingly unrelated regions.

Chemicals in the stratosphere and sea surface temperatures in the Pacific Ocean respond during solar maximum in a way that amplifies the Sun's influence on some aspects of air movement.

"The Sun, the stratosphere, and the oceans are connected in ways that can influence events such as winter rainfall in North America," says NCAR scientist Gerald Meehl, the lead author of the paper. "Understanding the role of the solar cycle can provide added insight as scientists work over the next decade or two toward predicting regional weather patterns."

The results builds on recent papers by Meehl and colleagues exploring the link between the peaks in the solar cycle and events on Earth that resemble aspects of La Niña events, but are distinct from those larger patterns associated with changes in pressure and known as the Southern Oscillation.

The connection between peaks in solar energy and cooler water in the equatorial Pacific was first discovered by Harry Van Loon of NCAR and Colorado Research Associates, a co-author of the paper.

The contribution by Meehl and his colleagues is to document that two mechanisms that had been previously theorized in fact work together to amplify the response in the tropical Pacific.

The team first confirmed a theory that the slight increase in solar energy during the peak production of sunspots is absorbed by stratospheric ozone.

The energy warms the air in the stratosphere over the tropics where the sunlight is most intense, while also stimulating the production of additional ozone there that absorbs even more solar energy.

Since the stratosphere warms unevenly, with the most pronounced warming occurring at lower latitudes, stratospheric winds are altered and, through a chain of interconnected processes, end up strengthening tropical storms and precipitation.

At the same time, the increased sunlight at solar maximum causes a slight warming of ocean surface waters, especially across the subtropical Pacific, where Sun-blocking clouds are normally scarce.

That small amount of extra heat leads to more evaporation, producing additional water vapor. In turn, the moisture is carried by trade winds to the normally rainy areas of the western tropical Pacific, fueling heavier rains and reinforcing the effects of the stratospheric mechanism.

As more sunshine hits drier areas, these changes reinforce each other, leading to less clouds in the subtropics, allowing even more sunlight to reach the surface, and producing a positive feedback loop that further intensifies the climate response.

These stratospheric and ocean responses during solar maximum keep the eastern Pacific even cooler and drier than usual, producing conditions similar to a La Niña event.

However, the cooling of about 1-2 degrees Fahrenheit is focused further east than in a typical La Niña, is only about half as strong, and is associated with different wind patterns in the stratosphere.

Earth's response to the solar cycle continues over the year or two following peak sunspot activity. The La Niña-like pattern triggered by the solar maximum tends to evolve into a pattern similar to El Niño, as slow-moving currents replace the cool water over the eastern tropical Pacific with warmer water.

Again, the ocean response is only about half as strong as with El Niño, and the lagged warmth is not as consistent as the cold event-like pattern that occurs during peaks in the solar cycle.

Solar maximum could potentially enhance a true La Niña event or dampen a true El Niño event. The La Niña of 1988-89 occurred near the peak of solar maximum.

That La Niña became unusually strong and was associated with significant changes in weather patterns, such as an unusually mild and dry winter in the southwestern United States.

The Indian monsoon, Pacific precipitation and sea surface temperatures, and other regional climate patterns are largely driven by rising and sinking air in Earth's tropics and subtropics.

The new study could help scientists use solar-cycle predictions to estimate how that circulation, and the regional climate patterns related to it, might vary over the next decade or two.

To tease out the elusive mechanisms that connect the Sun and Earth, the study team needed three computer models that provided overlapping views of the climate system.

One model, which analyzed the interactions between sea surface temperatures and lower atmosphere, produced a small cooling in the equatorial Pacific during solar maximum years.

The second model, which simulated the stratospheric ozone response mechanism, produced some increases of tropical precipitation but on a much smaller scale than the observed patterns.

The third model contained ocean-atmosphere interactions as well as the role of ozone. It showed, for the first time, that the two combined to produce a response in the tropical Pacific during peak solar years that was close to actual observations.

"With the help of increased computing power and improved models, as well as observational discoveries, we are uncovering more of how the mechanisms combine to connect solar variability to our weather and climate," Meehl says.

The research was also funded by the U.S. Department of Energy.