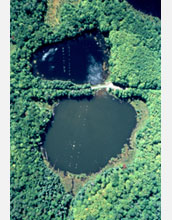 Early warning indicators have been found in Wisconsin's side-by-side Peter and Paul Lakes.

What do abrupt changes in ocean circulation and Earth's climate, shifts in wildlife populations and ecosystems, the global finance market and its system-wide crashes, and asthma attacks and epileptic seizures have in common?

According to a paper published this week in the journal Nature, all share generic early-warning signals that indicate a critical threshold of change dead ahead.

In the paper, Martin Scheffer of Wageningen University in The Netherlands and co-authors, including William Brock and Stephen Carpenter of the University of Wisconsin at Madison and George Sugihara of the Scripps Institution of Oceanography in La Jolla, Calif., found that similar symptoms occur in many systems as they approach a critical state of transition.

"It's increasingly clear that many complex systems have critical thresholds--'tipping points'--at which these systems shift abruptly from one state to another," write the scientists in their paper.

Especially relevant, they discovered, is that "catastrophic bifurcations," a diverging of the ways, propel a system toward a new state once a certain threshold is exceeded.

Like Robert Frost's well-known poem about two paths diverging in a wood, a system follows a trail for so long, then often comes to a switchpoint at which it will strike out in a completely new direction.

That system may be as tiny as the alveoli in human lungs or as large as global climate.

"These are compelling insights into the transitions in human and natural systems," says Henry Gholz, program director in the National Science Foundation (NSF)'s Division of Environmental Biology, which supported the research along with NSF's Division of Ocean Sciences.

"The information comes at a critical time--a time when Earth's and, our fragility, have been highlighted by global financial collapses, debates over health care reform, and concern about rapid change in climate and ecological systems."

It all comes down to what scientists call "squealing," or "variance amplification near critical points," when a system moves back and forth between two states.

"A system may shift permanently to an altered state if an underlying slow change in conditions persists, moving it to a new situation," says Carpenter.

Eutrophication in lakes, shifts in climate, and epileptic seizures all are preceded by squealing.

Squealing, for example, announced the impending abrupt end of Earth's Younger Dryas cold period some 12,000 years ago, the scientists believe. The later part of this episode alternated between a cold mode and a warm mode. The Younger Dryas eventually ended in a sharp shift to the relatively warm and stable conditions of the Holocene epoch.

The increasing climate variability of recent times, state the paper's authors, may be interpreted as a signal that the near-term future could bring a transition from glacial and interglacial oscillations to a new state--one with permanent Northern Hemisphere glaciation in Earth's mid-latitudes.

In ecology, stable states separated by critical thresholds of change occur in ecosystems from rangelands to oceans, says Carpenter.

The way in which plants stop growing during a drought is an example. At a certain point, fields become deserts, and no amount of rain will bring vegetation back to life. Before this transition, plant life peters out, disappearing in patches until nothing but dry-as-bones land is left.

Early-warning signals are also found in exploited fish stocks. Harvesting leads to increased fluctuations in fish populations. Fish are eventually driven toward a transition to a cyclic or chaotic state.

Humans aren't exempt from abrupt transitions. Epileptic seizures and asthma attacks are cases in point. Our lungs can show a pattern of bronchoconstriction that may be the prelude to dangerous respiratory failure, and which resembles the pattern of collapsing land vegetation during a drought.

Epileptic seizures happen when neighboring neural cells all start firing in synchrony. Minutes before a seizure, a certain variance occurs in the electrical signals recorded in an EEG.

Shifts in financial markets also have early warnings. Stock market events are heralded by increased trading volatility. Correlation among returns to stocks in a falling market and patterns in options prices may serve as early-warning indicators.

"In systems in which we can observe transitions repeatedly," write the scientists, "such as lakes, ranges or fields, and such as human physiology, we may discover where the thresholds are.

"If we have reason to suspect the possibility of a critical transition, early-warning signals may be a significant step forward in judging whether the probability of an event is increasing."

Other co-authors of the paper are Jordi Bascompte and Egbert van Nes of the Consejo Superior de Investigaciones Scientificas, Sevilla, Spain; Victor Brovkin of the Max Planck Institute for Meteorology in Hamburg, Germany; Vasilis Dakos of the Potsdam Institute for Climate Research in Potsdam, Germany; and Max Rietkerk of Utrecht University in The Netherlands.

The research also was funded by the Institute Para Limes and the South American Institute for Resilience and Sustainability Studies, as well as the Netherlands Organization of Scientific Research and the European Science Foundation, among others.