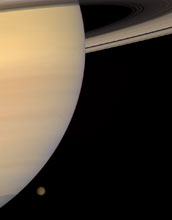 A view of Saturn and Titan created by combining images taken by the Cassini spacecraft January 2008.

An international team of scientists has announced the confirmation of a key chemical reaction that forms the molecule triacetylene in the ultra-cold atmosphere of Saturn's moon Titan.

The team presents their findings in the Sept. 14, 2009, advance online issue of the Proceedings of the National Academy of Sciences. Funding for the study was provided by the National Science Foundation (NSF).

Triacetylene is member of the polyyne family of compounds. Polyynes are thought to serve as an ultraviolet radiation shield in planetary environments, thus acting as prebiotic ozone, and as important components of the orange-colored and aerosol-based haze shrouding Titan.

Scientists have been researching the role of triacetylene, as well as the polyyne diacetylene, in the chemical evolution of Titan's atmosphere for the last four decades.

Triacetylene and diacetylene are molecules consisting of six and four carbon atoms, respectively, and two hydrogen atoms. The atoms in each molecule are connected by alternating single and triple bonds.

Alas, the underlying chemical processes initiating and controlling the formation and growth of the two polyynes are the least understood to date.

Based on limited laboratory studies related to the formation of soot, early planetary chemists developed photochemical models of Titan's atmosphere.

"Surprisingly, the photochemical models show inconsistent mechanisms for the production of polyynes," said Ralf Kaiser, a physical chemist at the University of Hawaii, co-author and team leader. A mechanism is the sequence of steps in a chemical reaction.

The arrival of the Cassini spacecraft at Titan in 2004, and the landing of its Huygens probe on Titan's surface in 2005, confirmed the abundance of diacetylene and acetylene on Titan. Acetylene is made of two carbon and two hydrogen atoms; the carbon atoms are connected by a triple bond. Triacetylene was also detected in Titan's most outer atmosphere via a positively charged form of triacetylene with an additional hydrogen atom.

The mission also revealed that the transformation of acetylene and diacetylene to polyacetylenes such as triacetylene likely present one of the most fundamental steps in the evolution of planetary atmospheres.

To unravel the formation of triacetylene and provide an accurate photochemical model, Kaiser and his collaborators first confirmed in their earthly laboratory that triacetylene can be formed by a single collision of a "radical" ethynyl molecule and a diacetylene molecule.

Ethynyl is highly reactive and made of two carbon atoms connected by a triple bond, one hydrogen atom connected by a single bond, and a lone electron on the exterior carbon atom. It is the lone or radical electron that initiates ethynyl's attack on other molecules (see third side image).

Mebel's computations confirmed that triacetylene may be formed from the reaction of a single radical ethynyl molecule colliding with diacetylene and the existence of three transient intermediate molecules.

Perhaps most importantly, since the temperature of Titan's atmosphere ranges from -99 F, or -73 C, to -290 F, or -179 C, which necessitates the need for chemical reactions to release energy, Mebel's computations confirmed that the formation of triacetylene releases energy.

To complete their study, Danie Liang and Yuk Yung, planetary scientists at Taiwan's Academia Sinica and California Institute of Technology (Caltech), respectively, performed photochemical modeling studies of Titan's atmosphere. The models suggest that triacetylene may serve as a building block to form more complex and longer polyynes and produce potential precursors for the aerosol-based layers of haze surrounding Titan.

Using a combined experimental, theoretical and modeling study, "Kaiser and his collaborators have demonstrated a successful approach to solving a complex chemistry problem," said Charles Pibel, a program director in the NSF Division of Chemistry.

In the future, Kaiser will combine his research results with terrestrial-based observations of Titan's atmosphere. Alan Tokunaga, an astronomer at the University of Hawaii, Institute for Astronomy, is currently collecting these observations using an infrared telescope situated on the snowcapped peak of Mauna Kea, an inactive volcano in Hawaii.

Funding for the study is provided by the NSF Division of Chemistry and Office of International Science and Engineering (Gu, Kim, Kaiser, Mebel), and the National Science Council, Taiwan (Liang).