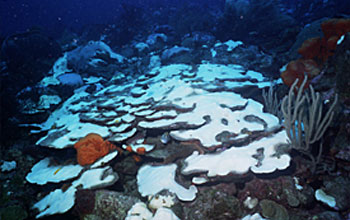 This image was taken in October, 2005, during a coral-bleaching event in the Caribbean.

A rare opportunity has allowed a team of scientists to evaluate corals--and the essential, photosynthetic algae that live inside their cells--before, during, and after a period in 2005 when global warming caused sea-surface temperatures in the Caribbean to rise.

The team, led by Penn State biologist Todd LaJeunesse, found that a rare species of algae that's tolerant of stressful environmental conditions proliferated in corals at a time when more sensitive algae that usually dwell within the corals were being expelled.

The results will be published in the online version of the journal Proceedings of the Royal Society B on September 9, 2009.

Certain species of algae have evolved over millions of years to live in symbiotic relationships with species of corals. These photosynthetic algae provide the corals with nutrients and energy, while the corals provide the algae with a place to live.

"There is a fine balance between giving and taking in these symbiotic relationships," said LaJeunesse.

Symbiodinium trenchi is normally a rare species of algae in the Caribbean, according to LaJeunesse. "Because the species is apparently tolerant of high or fluctuating temperatures, it was able to take advantage of a 2005 warming event and become more prolific."

Symbiodinium trenchi appears to have saved certain colonies of coral from the damaging effects of unusually warm water.

"As ocean temperatures rise as a result of global warming, we can expect this species to become more common and persistent," said LaJeunesse. "However, since it is not normally associated with corals in the Caribbean, we don't know if its increased presence will benefit or harm corals in the long term."

If Symbiodinium trenchi takes from the corals more than it gives back, over time the corals' health will decline.

"These scientists took advantage of just such an event--with the unexpected discovery that an alternate algal species was waiting in the wings. Whether this 'understudy' helps or hinders its host remains to be determined."

In 2005, sea surface temperatures in the Caribbean rose by up to two degrees Celsius above normal for a period of three to four months, high enough and long enough to severely stress corals.

The process of damaged or dying algae being expelled from the cells of corals is known as bleaching because it leaves behind bone-white coral skeletons that soon will die without their symbiotic partners.

During the summer of 2005, prior to the bleaching event, LaJeunesse and his colleagues collected samples of coral and algae from two locations near Barbados in the Caribbean.

By late November, water temperatures had peaked and many corals were bleached.

The team collected samples of coral and algae during the bleaching event and again two years after ocean temperatures returned to normal. In the laboratory, they sequenced the organisms' DNA to identify the species.

"During the bleaching event, we found that Symbiodinium trenchi, which is rarely found in the Caribbean, had increased in frequency by 50 percent or more in coral species that are most sensitive to warm water," said LaJeunesse.

"We also saw this species in corals where it had never been before. Two years later, we found that the abundance and occurrence of Symbiodinium trenchi had diminished significantly. Today the symbioses have mostly recovered to their normal state, and the corals have been repopulated by their typical algal symbionts."

"Because Symbiodinium trenchi does not appear to have successfully co-evolved with Caribbean coral species, it may not provide the corals with adequate nutrition," he said.

"We're interested in looking at how it behaves in other regions of the world where it's naturally common," he said.

The research also was supported by Florida International University, Penn State University, and the University of the West Indies.