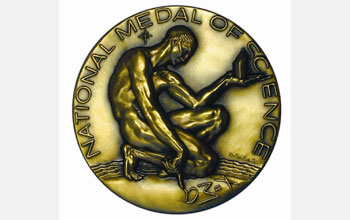 "These scientists, engineers and inventors are national icons, embodying the very best of American ingenuity and inspiring a new generation of thinkers and innovators," said President Obama. "Their extraordinary achievements strengthen our nation every day--not just intellectually and technologically but also economically, by helping create new industries and opportunities that others before them could never have imagined."

"Each year we are proud to help select the National Medal of Science recipients, gifted individuals who have contributed to America and to science with superb research," said Arden L. Bement, Jr., director of the National Science Foundation (NSF). "These 2008 laureates have impacted our lives by enhancing understanding of the human brain, mapping the human genome and uncovering the basis of human diseases to designing influential astronomical telescopes that further reveal the properties of matter, and establishing a scientific basis for Moon landings and today's widely used GPS [Global Positioning System]. Their accomplishments reflect the great import of this award."

The National Medal of Science was created by statute in 1959, and is administered for the White House by NSF. Awarded annually, the Medal recognizes individuals who have made outstanding contributions to science and engineering. Nominees are selected by a committee of Presidential appointees based on their advanced knowledge in, and contributions to, the biological, behavioral/social and physical sciences, as well as chemistry, engineering, computing and mathematics.

The National Medal of Technology and Innovation has its roots in a 1980 statute and is administered for the White House by the U.S. Department of Commerce's U.S. Patent and Trademark Office. The award recognizes individuals or companies for their outstanding contributions to the promotion of technology for the improvement of the economic, environmental or social well-being of the United States. Nominees are selected by a distinguished independent committee representing both the private and public sectors.