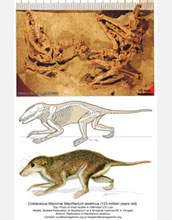 Life reconstruction of the new fossil mammal, as a chipmunk-sized animal.

Paleontologists in the U.S. and China have discovered a new species of mammal that lived 123 million years ago in what is now the Liaoning Province in China. The newly discovered chipmunk-sized animal, named Maotherium asiaticus, was found in the famous fossil-rich beds of the Yixian Formation in China.

The fossil mammal, reported in this week's issue of the journal Science, offers an important clue to how the mammalian middle ear evolved. It represents an intermediate stage in the evolutionary process of how modern mammals acquired a middle ear structure.

Hearing is an important sensory function for humans, whether for listening to an interesting conversation or to beautiful music, says Zhe-Xi Luo, a paleontologist at the Carnegie Museum of Natural History in Pittsburgh, Pa., and an author of the Science paper. For mammals as a whole, Luo says, hearing is an evolutionary adaptation vital for survival.

"With a tiny and intricate middle ear structure, mammals have more sensitive hearing in a wider range of sounds than other vertebrates," says H. Richard Lane, program director in the National Science Foundation (NSF)'s Division of Earth Sciences. "This sensitive hearing was crucial for mammals to develop nocturnal adaptations and to survive in dinosaur-dominated times."

The newly discovered ground-living mammal, some five inches long, had teeth with symmetrically arranged cusps specialized for feeding on insects and worms.

By studying this exquisitely preserved fossil, Luo and colleagues believe Maotherium is closely related to marsupials and placentals. What's most surprising, they say, is the animal's ear.

Mammals have highly sensitive hearing, far better than the hearing capacity of all other vertebrates. According to the Chinese and American scientists who discovered the new mammal, the middle ear bones of Maotherium are similar to those of modern mammals.

But unlike modern mammals, Maotherium's middle ear has an unusual connection to its lower jaw.

This connection, also known as the ossified Meckel's cartilage, resembles the embryonic condition of living mammals and the primitive middle ear of pre-mammalian ancestors. These mammal middle ear bones evolved from the bones of the jaw hinge in reptilian relatives.

Paleontologists have long tried to understand the evolutionary pathway through which these precursor jaw-bones became separated from the jaw and moved into the middle ears of modern mammals.

Maotherium asiaticus is a beautifully preserved fossil, one that made it possible for us to reconstruct how the middle ear could be attached to the jaw, says Luo.

Modern biology has shown that genes can trigger the development of unusual middle ear structures like the "re-appearance" of the Meckel's cartilage in modern mice.

The scientists suggest that the unusual middle ear structure found in the Chinese fossil, such as the ossified Meckel's cartilage, is the manifestation of developmental gene mutations in long-ago mammal evolution.

The Science paper is co-authored by paleontologists Qiang Ji of the Chinese Academy of Geological Sciences in Beijing and Xinliang Zhang of the Henan Provincial Geological Museum, along with other collaborators.