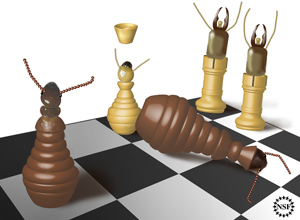 Staying at home may have given the very first termite youngsters the best opportunity to rule the colony when their parents were killed by their neighbors. This is according to new research supported by the National Science Foundation and published today in the Proceedings of the National Academy of Sciences.

Researchers say the incentive to remain home with siblings and inherit the parents' estate could be the missing link to a question posed nearly 150 years ago by evolution theorist Charles Darwin. He wondered how natural selection could favor traits that reduce reproductive success among worker offspring in highly social insects.

This is especially curious because Darwin argued for small biological changes that result in greater chances of survival and successful reproduction over time. But social insects, ants, bees, wasps and termites colonies in particular can have over a million sterile and/or non-reproductive workers and soldiers, which seemed counterintuitive.

Research conducted by biologists at the University of Maryland, College Park shows that when two neighboring termite families meet within the same log, one or both families' kings and queens are killed and a new, merged, cooperative colony results. Replacement "junior" kings and queens then develop from either or both colonies' non-reproducing, worker offspring, and termites from the two families may even interbreed.

Pheromones produced by healthy kings and queens that normally suppress gonad development in worker or "helper" classes are absent or reduced when kings and queens are killed. As a result, suppression is lifted and nonrelated, "sterile," helper offspring from both colonies are able to become new "reproductives" and assume the throne.

"Assassination of founding kings and queens may have driven young termite offspring to remain as non-reproducing workers in their birth colonies," says lead researcher and University of Maryland professor Barbara L. Thorne. Rather than risking dangerous attempts at independent colony initiation outside the nest, remaining at home may have given these first termites a better opportunity to become reproducers by inheriting their parents' throne.