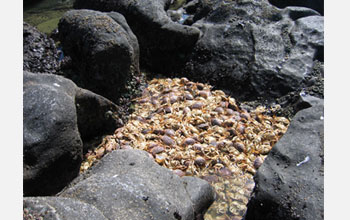 Pile of beached crabs that suffocated in a dead zone. Dead zones may produce miles of such piles.

The Earth currently has more than 400 so-called "dead zones"--expanses of oxygen-starved ocean covering hundreds, or even thousands, of square miles that become virtually devoid of animal life during the summer; the worldwide count of dead zones is doubling every decade.

Most dead zones, such as the Gulf of Mexico's notorious dead zone, are caused by pollution that is dumped into oceans by rivers. But every summer since 2002, the Pacific Northwest's coastal waters--one of the U.S.'s most important fisheries--has been invaded by massive dead zones that are believed to be caused by an entirely different and surprising phenomena: changes in oceanic and atmospheric circulation that may, in turn, be caused by climate change.

How could climate change cause dead zones? What do dead zones look like and what are their ecological impacts?  And how, on Earth, are scientists sleuthing out the causes of perplexing marine processes that cover such huge swaths of the sea?  Find out in the National Science Foundation's new online, multimedia package on dead zones.