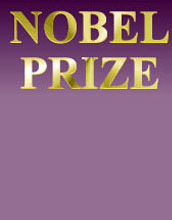 The 2009 Nobel Prizes have been awarded.

The National Science Foundation (NSF) congratulates the 2009 Nobel laureates, particularly those who have received NSF funding over the years: Jack W. Szostak, who shared the prize in physiology or medicine; Thomas A. Steitz, who shared the prize in chemistry; and Elinor Ostrom and Oliver E. Williamson who earned the Sveriges Riksbank Prize in economic sciences in memory of Alfred Nobel 2009.

"Through a highly competitive, merit-based system, NSF is in the business of identifying raw scientific talent early, funding promising research and fueling discovery," said Arden L. Bement, Jr., NSF director. "This year's Nobel Prize recipients embody the investment of America and of the NSF in talented and hardworking researchers whose contributions improve the global future for society and mankind."

Now a total of 187 U.S. and U.S.-based researchers have had their research pursuits funded by NSF earlier in their careers, before their research became widely recognized and they became Nobel laureates.

The NSF-funded 2009 laureates were recognized for the following research:

Jack W. Szostak shared the Nobel Prize in Physiology or Medicine with Carol W. Greider and Elizabeth H. Blackburn "for the discovery of how chromosomes are protected by telomeres and the enzyme telomerase."

Together, they have solved a major problem in biology: how chromosomes can be copied in a complete way during cell divisions and how they are protected against degradation. The Nobel Laureates have shown that the solution is to be found in the ends of the chromosomes--the telomeres--and in an enzyme that forms them--telomerase.

If the telomeres are shortened, cells age. Conversely, if telomerase activity is high, telomere length is maintained, and cellular senescence is delayed. This is the case in cancer cells, which can be considered to have eternal life. Certain inherited diseases, in contrast, are characterized by a defective telomerase, resulting in damaged cells. The award of the Nobel Prize recognizes the discovery of a fundamental mechanism in the cell, a discovery that has stimulated the development of new therapeutic strategies.

The discoveries by Blackburn, Greider and Szostak have added a new dimension to our understanding of the cell, shed light on disease mechanisms, and stimulated the development of potential new therapies.

To date, NSF has funded 42 researchers who earned Nobel Prizes in Medicine.

Thomas A. Steitz, shared the Nobel Prize in Chemistry with Venkatraman Ramakrishnan and Ada E. Yonath "for studies of the structure and function of the ribosome," one of life's core processes, the ribosome's translation of DNA information into life. Ribosomes produce proteins, which in turn control the chemistry in all living organisms. As ribosomes are crucial to life, they are also a major target for new antibiotics.

Ramakrishnan, Steitz and Yonath showed what the ribosome looks like and how it functions at the atomic level. All three have used a method called X-ray crystallography to map the position for each and every one of the hundreds of thousands of atoms that make up the ribosome.

Inside every cell in all organisms, there are DNA molecules. They contain the blueprints for how a human being, a plant or a bacterium, looks and functions. But the DNA molecule is passive. If there was nothing else, there would be no life.

The blueprints become transformed into living matter through the work of ribosomes. Based upon the information in DNA, ribosomes make proteins: oxygen-transporting haemoglobin, antibodies of the immune system, hormones such as insulin, the collagen of the skin, or enzymes that break down sugar. There are tens of thousands of proteins in the body and they all have different forms and functions. They build and control life at the chemical level.

An understanding of the ribosome's innermost workings is important for a scientific understanding of life. This knowledge can be put to a practical and immediate use; many of today's antibiotics cure various diseases by blocking the function of bacterial ribosomes. Without functional ribosomes, bacteria cannot survive. This is why ribosomes are such an important target for new antibiotics.

This year's three Laureates have all generated 3D models that show how different antibiotics bind to the ribosome. These models are now used by scientists in order to develop new antibiotics, directly assisting the saving of lives and decreasing humanity's suffering.

To date, NSF has funded 48 researchers who earned Nobel Prizes in Chemistry.

Ostrom has demonstrated how common property can be successfully managed by user associations. Oliver Williamson has developed a theory where business firms serve as structures for conflict resolution. Over the last three decades these seminal contributions have advanced economic governance research from the fringe to the forefront of scientific attention.

Economic transactions take place not only in markets, but also within firms, associations, households, and agencies. Whereas economic theory has comprehensively illuminated the virtues and limitations of markets, it has traditionally paid less attention to other institutional arrangements. The research of Ostrom and Williamson demonstrates that economic analysis can shed light on most forms of social organization.

Ostrom has challenged the conventional wisdom that common property is poorly managed and should be either regulated by central authorities or privatized. Based on numerous studies of user-managed fish stocks, pastures, woods, lakes, and groundwater basins, Ostrom concludes that the outcomes are, more often than not, better than predicted by standard theories. She observes that resource users frequently develop sophisticated mechanisms for decision-making and rule enforcement to handle conflicts of interest, and she characterizes the rules that promote successful outcomes.

Williamson has argued that markets and hierarchical organizations, such as firms, represent alternative governance structures which differ in their approaches to resolving conflicts of interest. The drawback of markets is that they often entail haggling and disagreement. The drawback of firms is that authority, which mitigates contention, can be abused. Competitive markets work relatively well because buyers and sellers can turn to other trading partners in case of dissent. But when market competition is limited, firms are better suited for conflict resolution than markets. A key prediction of Williamson's theory, which has also been supported empirically, is therefore that the propensity of economic agents to conduct their transactions inside the boundaries of a firm increases along with the relationship-specific features of their assets.

To date, NSF has funded 41 researchers who earned Nobel Prizes in Economics.

A complete list of all NSF-funded Nobel Prize winners to date is posted at: http://www.nsf.gov/news/news_summ.jsp?cntn_id=100683.