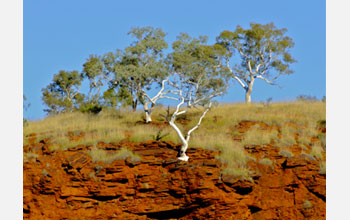 Scientists widely accept that around 2.4 billion years ago, the Earth's atmosphere underwent a dramatic change when oxygen levels rose sharply.

Called the "Great Oxidation Event" (GOE), the oxygen spike marks an important milestone in Earth's history, the transformation from an oxygen-poor atmosphere to an oxygen-rich one, paving the way for complex life to develop.

Two questions that remain unresolved in studies of the early Earth are when oxygen production via photosynthesis got started, and when it began to alter the chemistry of Earth's ocean and atmosphere.

Now a research team led by geoscientists at the University of California at Riverside (UCR) corroborates recent evidence that oxygen production began in Earth's oceans at least 100 million years before the GOE.

"Their findings go a step farther," says Enriqueta Barrera, program director in the National Science Foundation (NSF)'s division of earth sciences, which funded the research along with NASA, "to demonstrating that even very low concentrations of oxygen can have profound effects on ocean chemistry."

Study results appear in this week's issue of the journal Science.

To arrive at their results, the researchers analyzed 2.5 billion-year-old black shales from Western Australia.  Fossilized pieces of the ancient seafloor, the fine layers within the rocks allowed the researchers to page through ocean chemistry's evolving history.

The shales revealed that episodes of hydrogen sulfide accumulation in the oxygen-free deep ocean occurred nearly 100 million years before the GOE, and up to 700 million years earlier than such conditions were predicted by past models.

Scientists have long believed that the early ocean, for more than half of Earth's 4.6 billion-year history, was characterized by high amounts of dissolved iron under conditions of essentially no oxygen.

"The conventional wisdom has been that appreciable atmospheric oxygen is needed for sulfidic conditions to develop in the ocean," said Chris Reinhard, an earth scientist at UCR and one of the research team members.

"We found, however, that sulfidic conditions in the ocean are possible even when there is very little oxygen, below about 1/100,000th of that in the modern atmosphere."

Even very low oxygen levels in the atmosphere, the mineral pyrite can weather on the continents, resulting in the delivery of sulfate to the ocean by rivers. Sulfate is the key ingredient in hydrogen sulfide formation in the ocean.

Timothy Lyons, a UCR biogeochemist who led the research, explained that the hydrogen sulfide in the ocean is a fingerprint of photosynthetic production of oxygen 2.5 billion years ago.

"A pre-GOE emergence for oxygenic photosynthesis is a matter of intense debate, and its resolution lies at the heart of understanding the evolution of diverse forms of life," he said. "We have found an important piece of that puzzle."

"Our data point to oxygen-producing photosynthesis long before concentrations of oxygen in the atmosphere were even a tiny fraction of what they are today, suggesting that oxygen-consuming chemical reactions were offsetting much of the production," said Reinhard.

The researchers argue that the presence of small amounts of oxygen may have stimulated the early evolution of eukaryotes--organisms whose cells bear nuclei--millions of years prior to the GOE.

"This initial oxygen production set the stage for the development of animals almost two billion years later," Lyons said. "The evolution of eukaryotes had to take place first."

The findings also have implications for the search for life on extrasolar planets.

"Our findings add to growing evidence suggesting that biological production of oxygen is a necessary but not sufficient condition for the evolution of complex life," Reinhard said.

"A planetary atmosphere with abundant oxygen would provide a very promising biosignature.

"But one of the lessons is that just because spectroscopic measurements don't detect oxygen in the atmosphere of another planet, doesn't necessarily mean that no biological oxygen production is taking place."

To analyze the shales, Reinhard first pulverized them into a fine powder in Lyons's laboratory.

Next, the powder was treated with a series of chemicals to extract different minerals. The extracts were then run on a mass-spectrometer.

"One exciting thing about our discovery of sulfidic conditions occurring before the GOE is that it might shed light on ocean chemistry during other periods in the geologic record, such as a poorly understood 400 million-year interval between the GOE and around 1.8 billion years ago," Reinhard said, "a point in time when the deep oceans stopped showing signs of high iron concentrations.

"Now perhaps we have an explanation. If sulfidic conditions could occur with very small amounts of oxygen around, then they might have been even more common and widespread after the GOE."

Said Lyons, "This is important because oxygen-poor and sulfidic conditions almost certainly impacted the availability of nutrients essential to life, such as nitrogen and trace metals. The evolution of the ocean and atmosphere were in a cause-and-effect balance with the evolution of life."

Reinhard and Lyons were joined in the research by Clint Scott of UCR; Ariel Anbar of the Arizona State University, Tempe; and Rob Raiswell of the University of Leeds, United Kingdom.